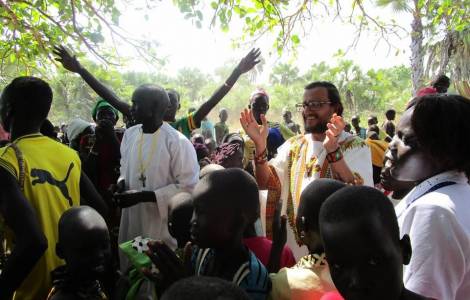 2019-11-30
World AIDS Day: The DREAM program of the Community of Sant’Egidio for 11 African countries

2019-11-11
Undermining mission means undermining the very nature of the Church: No to "invisible Shepherds"

Rome (Agenzia Fides) - In the first half of the last century the Comboni Missionaries (MCCJ) in Africa had produced - in addition to specialized studies disseminated in various articles for magazines and books - 63 grammars, 88 vocabularies, 114 catechisms, 23 books of Sacred History , 54 prayer books, 137 school texts: syllabaries, reading books, arithmetic, history, geography, hygiene, etc. This vast production, it is important to underline, was not the result of individual religious, but of a job that was nourished by daily contact with people, the questions asked, attentive listening and passionate observation.
When a missionary is sent to a so-called 'mission' area, he has the main task of studying the languages and culture of the people. Knowledge of the language is essential because the missionary's job is to proclaim the Gospel. Furthermore, at the basis of this effort there is an attitude of appreciation and esteem for people and their culture of their ability to understand and 'embody' Christian truths.
A missionary is a "man of the Word". But the Word of God must be made in people's jargon. The need to translate it into the local language therefore arises, but it is not a simple thing. "How do we translate Javhé, temple, pagan, sin, grace, justify, save? What does God do when he forgives?". This testimony of a Comboni missionary then Bishop, Mgr. Giuseppe Sandri, who translated, together with a team of local people, some books of the Bible in South Africa's Xitsonga language - part of a vast project of the translation of the Bible of the South African Biblical Society - highlights the difficulties of translating the Bible into the expressive categories of the population.
Before the II Vatican, the book of Christian formation was catechism, in particular the catechism of Pius X, in the shortened version of 1912. The translations of the Bible were limited to some 'biblical stories' translated as 'aid' to the truths of faith contained in the catechism. The first translations of entire books of the Bible are the work of missionaries from the churches of the Reformation. The translation of the Bible in the Catholic field will be one of the fruits of the II Vatican, favored by the new climate of ecumenical openness and by the rediscovery of the Holy Book in the life of the Christian. When the translation into local languages is the result of a joint effort with the missionaries of other Christian churches, the so-called Deuterocanonical and Apocryphal Books will be added to the Bible, i.e. those books of the Old Testament not included in the Hebrew canon and not accepted by the churches of the Reformation but present in the Catholic tradition (Esther - in Greek - Giuditta, Tobia, First and Second book of the Maccabees, Wisdom, Sirach, Baruch, Letter of Jeremiah, and some passages added to the book of Daniel).
What is interesting is the statement of Mgr. Sandri on how the translation of the Bible proceeded: "Even after having found the true meaning of the Hebrew or Greek text, it is necessary to render it in current Xitsonga".
In my African experience - I worked 30 years in Africa between Uganda and Kenya - I have always been amazed at the desire of African Catholic Christians to read the Bible and their knowledge of biblical facts and characters - a desire certainly stimulated by the examples of many Christians from other churches for whom the Bible is the essential tool of prayer and Christian formation. Now the Bible is in people's homes, it is read in the family and in the various circumstances of life: the birth of a child, a wedding, a funeral, a visit to a sick person are very much felt by the members of a small community and there is always a catechist or leader ready to guide those present in the reflection of a biblical passage.
Above all, it is the instrument of prayer and formation in the Small Christian Communities where one meditates, prays, shares reflections and applies what the Sacred Book tells in today's life. The Word of God, helps the poor to discover the presence of God in their life and to have that hope that sustains them in the struggle to improve the difficult conditions in which they find themselves; the painful events of the people of Israel are included in the often painful and difficult life of the people and the words of Jesus give strength to fight and not be discouraged in the face of the difficulties and often the tragedies of life. (Fr. Mariano Tibaldo, Comboni missionary) (Agenzia Fides, 25/1/2020)

AFRICA/KENYA - "Do not keep the Bible on shelves, but read it, meditate on it and then put into practice the Word of God"