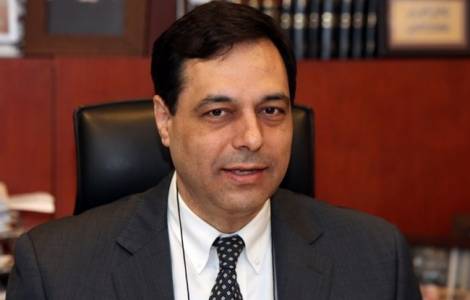 2020-01-29
Heads of Churches: no to street violence. Support for the new Lebanese government

Beirut (Agenzia Fides) - Almost three months after the resignation of the government led by Saad Hariri, in a political and social climate still marked by unresolved tensions, Lebanon is preparing to have a new government team, led by the Sunni, Hassan Diab (in the photo), 60 years old, former professor at the American University of Beirut. The new executive will be formed by the Premier and 19 ministers, 13 men and 6 women. Also this time, from a confessional point of view, the government team will represent a projection of the composite Lebanese religious map: among the 19 new ministers there will be 4 Maronite Christians, 4 Shiite Muslims, 3 Sunni Muslims, 3 Greek Orthodox Christians, 2 Druze, 2 Greek Catholic Christians and an Armenian Orthodox Christian.
The names of the government team were announced on Tuesday, which put an end to an impasse of several months, triggered by street protests against the government establishment that had caused the resignation of former Prime Minister Hariri on 29 October 2019.
The new government, which enjoys the support of the coalition which also includes the Shiite Hezbollah party and the Free Patriotic Movement (political formation founded by the current Lebanese President, the Maronite Michel Aoun), is expected to gain the confidence of Parliament next week, even if it does not seem to satisfy the demands of the anti-system demonstrations that have shaken Lebanon for months, and which have been marked by violence and street clashes in recent days. The new executive appears in fact composed of technicians linked to the Parties who also supported the previous coalition, while among the protesters there were those who asked to entrust the solution of the very serious national economic and social problems to technocrats totally independent of the forces that have dominated the Lebanese political scene. "The media are pessimistic, but we are optimistic", said parliament president Shia Nabih Berri on Tuesday. And also Cardinal Bechara Boutros Rai, Patriarch of Antioch of the Maronites, already on Wednesday 22 January underlined the opportunity to "give a chance" to the new executive, while the persistent street mobilizations confirmed the persistent closure of forces and sectors that intend not to grant any credit openings to the new executive.
In Lebanon, in the institutional system based on the balance between the different confessional components, the head of government must be a Sunni Muslim, while the President of parliament must be a Shiite and the President of the Republic must be a Maronite Christian. (GV) (Agenzia Fides, 24/1/2020)