AFRICA/NIGER - "They will be able to cut trees but not the roots of the cross": threats to Christians in the country 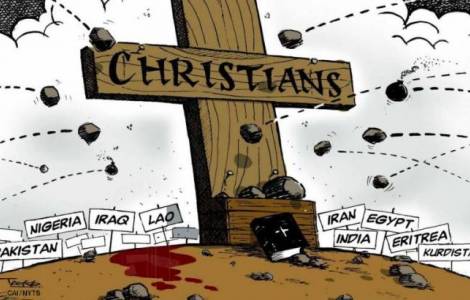 2020-05-28
The cross completed eliminated, symbol of the parish of Fr. Maccalli

2020-05-16
Prayer and hope for the release of Father Maccalli, still in the hands of his kidnappers

2020-02-15
Father Pier Luigi Maccali: the thorns and flowers of a kidnapping

Niamey (Agenzia Fides) - "The repeated threats to the Christian communities in the border area with Burkina Faso have achieved the aim they set: to decapitate the communities and then fall prey to the fear of professing faith in Sunday prayers in the chapels" (see Fides, 20/12/2019), writes Fr. Mauro Armanino, priest of the Society for African Missions in Niger, to Agenzia Fides.
"On Tuesday, January 14, in a village not far from Bomoanga, which for over a year has helplessly witnessed the kidnapping of Father Pierluigi Maccalli, - the missionary continues - a group of criminals who went to settle the scores with the chief nurse who works in a dispensary in the area, took the nephew from his home and was beheaded. In Bomoanga people no longer go to church on Sunday. The 'basilica', as Fr. Maccalli used to call it, conceived, built and inaugurated by him, is now deserted, as well as the school recently attacked".
In the note sent to Fides, Fr. Armanino highlights the bewilderment, the suffering, the fear but above all the awareness of the situation manifested during the formation meeting with the catechists and the animators of the Gourmanché area, a border with Burkina Faso, recently organized in Niamey.
The missionary concludes by saying: "In Makalondi, Kankani and Torodi, in the same area, the celebrations, albeit with caution, continue as always despite the fact that priests are not resident on the spot. The reality in rural areas is more complicated and, being difficult to access, they allow armed groups to act undisturbed. They will be able to cut the trees but not the roots of the cross. On the third day there is a resurrection". (MA/AP) (Agenzia Fides, 23/1/2020)