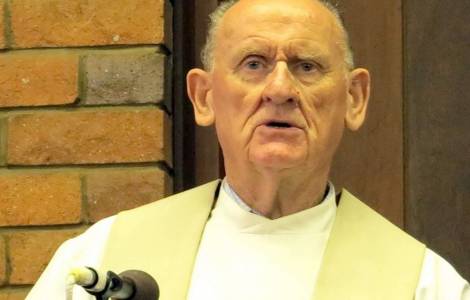 2020-01-17
The Bishop of Tombura-Yambio to politicians: "True leadership is in favor of young people"

Johannesburg (Agenzia Fides) - The Oblates of Mary Immaculate in South Africa, OMISA are devastated by the death of Fr. Jozef (Jef) Hollanders, killed in a robbery in the parish of Bodibe, near Mahikeng, in the northwestern province of South Africa, on Sunday night 12 January", says a statement sent to Agenzia Fides. "His body was discovered on Monday afternoon by a parishioner. The police are fully involved in investigating his murder".
"We are deeply affected by what has happened. Jeff was found tied hand and foot and with a rope around his neck. A terrible death for someone who dedicated his whole life to his mission", says Fr. Daniël Coryn, provincial superior of the Oblate Missionaries of Mary, from Blanden in Belgium. According to His Exc. Mgr. Victor Phalana of Klerksdorp, Bishop of Bodibe, the missionary probably died of a heart attack or strangulation.
It is not excluded that Fr. Hollanders suffered a robbery attempt, but according to Archbishop Phalana, the robbers were misinformed: "Everyone knows he had no money. He served a poor community. He used every penny he ever owned for his people. He gave away everything he had". According to the Bishop, the ecclesial community has been hit hard. Fr. Hollanders was "full of enthusiasm, life and dedication" and spoke fluently Afrikaans and Tswana, a Bantu language spoken in South Africa and Botswana. "He was part of people's lives".
Fr. Hollanders was born in Belgium on March 4, 1937. He professed his first vows as an Oblate on September 8, 1958 and was ordained a priest on December 26, 1963. He arrived in South Africa on January 31, 1965.
"For 55 years was a dedicated and faithful missionary in the Tswana-speaking area, now North West Province of South Africa", underlines the statement. "He liked to create new Christian communities, which have become parishes or parish stations in what has become the diocese of Klerksdorp."
"We were reminded that Jesus died at the hands of others and we imagined that Father Jef would say:" Forgive them, because they do not know what they are doing", concludes the OMISA statement.
The funeral of Fr. Hollanders will take place on Wednesday 22 January, at 10 am, in the cathedral of Klerksdorp. (L.M.) (Agenzia Fides, 16/1/2020)