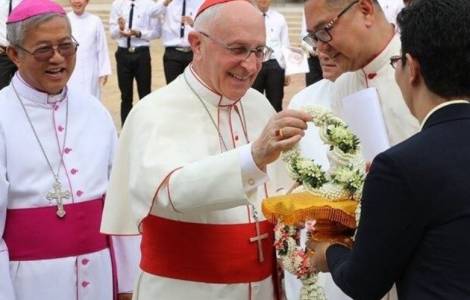 Vatican City (Agenzi Fides) - "Today there is a need for a renewed proclamation of the Gospel around the world, not only in the traditional 'mission territories' but also in the continents of ancient evangelization. From the mission ad gentes, today is the time for the inter gentes mission. Every baptized person is a missionary. And if in the past the proclamation of the Gospel was the prerogative of priests and religious, today we note an extraordinary participation of the laity, both individually and as members of ecclesial movements and groups: among them - novelty aroused by the Holy Spirit - there are also couples of spouses and families with children who fervently participate in the work of evangelization: this is a great reason for hope". This is what Cardinal Fernando Filoni says to Fides, who on January 15 ends his mandate at the helm of the Dicastery of "Propaganda Fide", of which he remains "Prefect emeritus", to begin his service as Grand Master of the Equestrian Order of the Holy Sepulcher of Jerusalem.
The Cardinal, during his farewell, wished to recall "the great responsibility of the Congregation towards over 1,200 ecclesiastical circumscriptions in Africa, Asia, Oceania, America" explaining that, to "get in touch with the young Churches", in almost nine years at the guide of the missionary Dicastery, he made about 50 trips, a propitious occasion to meet and listen to the local Churches, in order to "introduce them to the activity of the Congregation and, at the same time, understand their needs". This listening was functional in the main work of "Propaganda Fide", that of appointing Bishops and apostolic vicars in the dioceses of the territories under its jurisdiction, to "perceive what kind of Pastor each community awaits".
The Prefect emeritus again wanted to emphasize the valuable work of formation carried out by the Congregation for the Evangelization of Peoples which, thanks to the support of the Pontifical Mission Societies, annually provides about 500 scholarships to seminarians, priests and women religious of the young Churches, and takes care of the updating support for the new bishops, rectors and teachers of the seminaries of mission territories.
Then, faced with the drop in the offers collected on the occasion of World Mission Day, which allow the Pontifical Mission Societies to support thousands of projects all over the world, Cardinal Filoni launched an appeal: "If every baptized person gave the equivalent of one dollar a year for missions, it could respond to the expectations and needs of vast poor populations".
At the end of the Cardinal's mandate, Archbishop Giampietro Dal Toso, Adjunct Secretary of the Congregation for the Evangelization of Peoples and President of the Pontifical Mission Societies, greeted him with these words: "In your work you gave us security. The work of Prefect of Propaganda Fide is by no means easy, in particular a very delicate task is entrusted to this Congregation, that of providing for the Bishop’s appointment. In this task we felt confident of your experience, discernment, the result of careful listening, of wisdom, which guided your choices even in extremely complicated situations. This reliable guide has its peculiar foundation in an attitude of life that I cannot ignore: your self-denial, that is to say 'no' to oneself to serve the Church more freely". Mgr. Dal Toso, with a traditional South Tyrolean wish added: "Vergelt's Gott", that is "May God reward you": "May God reward you in consolation, blessing, company, all the good you have done and wanted for the missions from this office". (PA) (Agenzia Fides, 14/1/2020)

ASIA/PHILIPPINES - Cardinal Tagle: "Announcing the Gospel means communicating the presence and compassion of Christ with life"

EUROPE/SPAIN - "Día de Hispanoamérica": in communion with the Spanish missionaries in Latin America

EUROPE/SPAIN - "Día de Hispanoamérica": in communion with the Spanish missionaries in Latin America