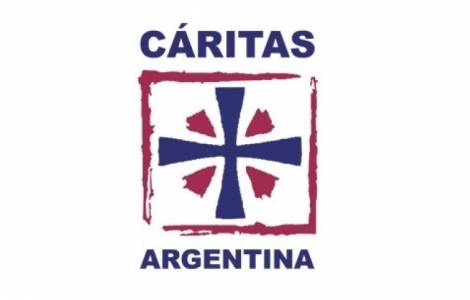 2020-02-18
"Stop stealing in the north": Salta area plundered of wealth and the inhabitants abandoned in misery

2020-02-14
Let's free ourselves from indifference and media sensationalism, let's look at the distressing reality of the natives

2020-01-14
Despite the maximum commitment of Caritas, the number of people in poverty is always high

2019-12-12
First speech by new President Fernández: "We must get out of this situation with solidarity"

2019-12-06
Sixteen million Argentines are poor, the Church calls for a social pact to assist them

Buenos Aires (Agenzia Fides) - "Our model is Christ, who came to serve with simplicity and humility" said Mgr. Carlos Tissera, Bishop of Quilmes, president of Caritas Argentina, recalling at the beginning of the year that the reality of hunger and those who suffer is hard but the Church, through Caritas, gives hope to people.
According to the report released by Caritas Argentina relating to the activity carried out in 2019, sent to Agenzia Fides, in the period between 27 September and 18 October 2019, Caritas distributed 810 tons of food to 54 dioceses across the country provided by the Ministry of Health and Social Development, for an approximate value of 77 million pesos, within the framework of the food emergency decreed. In turn, Caritas launched a fundraising campaign, which raised $ 1,626,020 between May and December to help 755 children and 2,358 families through canteens and snack distribution, from the diocese of Añatuya (Santiago del Estero), Concepción de Tucumán (Tucumán), Esquel (Chubut), Jujuy (Jujuy), Oberá (Misiones), Paraná (Entre Ríos), Reconquista (Santa Fe) and Salta (Salta).
"The logistical distribution required by this work of assistance required the maximum commitment on our behalf, but despite the efforts of our volunteers we still see a high percentage of people in poverty. We believe this is due to the fact that there are more people in need of staple food every day: the price increases and the lack of work make it difficult to access an increasing vulnerable population", says Sofía Terek, Coordinator of the area of immediate assistance and emergencies.
Caritas Argentina works to respond to the social problems of marginalized communities and people in situations of poverty and emergency in the country. Among its programs, it offers immediate help with 180,000 food packages per month and 600,000 food items. At the same time, it manages more than 760 canteens and over 3,000 places where breakfast, snacks and "glasses of milk" are provided to young children, school-age children, teenagers, pregnant women and the elderly.
In the third trimester of 2019, 40.8% of the Argentine population was classified as poor by the study carried out by the Social Debt Observatory of the Catholic University of Argentina (UCA), which specified that even poverty has reached 8.9 % (see Fides, 6/12/2019). According to the newspaper Ambito Financiero, four out of ten Argentines are poor, which means 16 million people. (SL) (Agenzia Fides, 14/1/2020)

AMERICA/HAITI - "Give this Country a chance": Nuncio's appeal to participants in the Dialogue Conference

ASIA/LEBANON - Maronite Patriarch: Trump's "Plan" for the Holy Land is "a sign of war and hatred"