AMERICA/NICARAGUA - Card. Brenes asks to continue to work for the release of all political prisoners and for peace 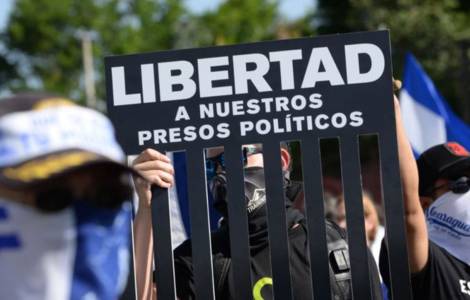 2020-02-17
The Bishop of Matagalpa presents an "ethical decalogue" for politicians; the release of all prisoners is still awaited

2020-02-13
Elections, a light of hope for the country that must be nurtured and protected

2020-01-16
New intimidations denounced against the Church, the unity of the people to build a new Nicaragua

2020-01-07
Card. Brenes asks to continue to work for the release of all political prisoners and for peace

2019-12-10
Mgr. Baez celebrated the feast of the Immaculate Conception with the Nicaraguan community of Miami

2019-12-09
New repression against the Church: the Bishop of Esteli denounces "the pain of a people"

Managua (Agenzia Fides) - An invitation to "those with social and political influence" to continue to work to ensure that all "people deprived of their freedom" are released in 2020, was addressed by Cardinal Leopoldo Brenes, Archbishop of Managua, on the feast of the Epiphany, on January 6th. He also asked the authorities and groups of power to start working for peace and to stop "disqualifying others". "I hope they continue to make their efforts so that this year 2020 our prisons can be freed from those people who are deprived of their freedom", said Cardinal Brenes immediately after the Eucharist celebrated in the Jesus Sacramenteto parish in Managua. "I believe that what we are lacking is the sense of unity as a nation; there is no country project. The problem exists because we have no love for the country, for our country", he concluded.
Epiphany, as a Catholic feast, is deeply felt among the Nicaraguan population, Mgr. Rolando Álvarez, Bishop of the diocese of Matagalpa, in the celebration in his diocese, underlined that the sense of unity of Nicaragua is found in the people: "The unity of Nicaragua has already begun in the people, because it is the Nicaraguan people to make its history, we must not wait for unity to come from outside, it is the people who must continue to strengthen the bonds of unity".
The situation of political prisoners in Nicaragua continues to be tense. After the release of a group of 91 political prisoners by the government just before the end of 2019, the threats against peasant, union and university leaders not only continued but actually increased.
Many of the "released" political prisoners denounced the constant persecution and aggression of the military groups against them: writings painted on the walls of their houses, firing overnight in front of houses, with the presence of military cars.
According to the note sent to Fides, the Inter-American Commission on Human Rights (IACHR) has asked for special protective measures for more than 15 people who have been arrested in an attempt to bring humanitarian aid to relatives of political prisoners on hunger strike (see Fides, 18 and 20/11/2019).
Although the precise number of political prisoners still in prison is unknown, the testimony of those released on the evening of December 30th underlines the apostolic Nuncio's commitment, with perseverance, discretion and insistence, to the release of political prisoners as established at start of dialogues with the government. "The Nuncio never gave up, never stopped insisting on what had been agreed and accepted, freeing all political prisoners", said José Adán Aguerri, a member of the Civic Alliance speaking to a local radio. Comment that he also wrote on Twitter on 30 December 2019: "Today we are full of hope. Thank God they are freeing political prisoners. A special recognition to the Apostolic Nuncio for his participation in this effort". (CE) (Agenzia Fides, 7/1/2020)