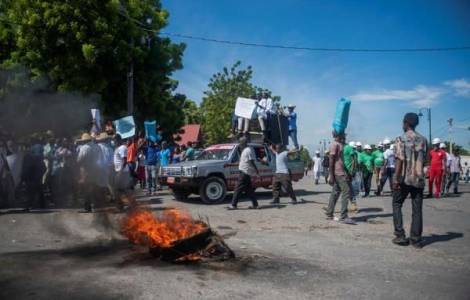 Port au Prince (Agenzia Fides) - Without a statement agreed between civil authorities and religious leaders, in Haiti the first day of the new year, the country's Independence Day from France, on January 1, 1804, the usual ‘Te Deum’ was not celebrated in the Cathedral of Les Gonaives, the cradle of independence, which is attended by the Head of State. Such a fact had not happened since 1954.
However, the event was not entirely sudden. A few days before the end of the year, some sources of information, such as HaitiLibre, published the news that a few days after the celebration of the 216th anniversary of Independence, the city of Les Gonaïves was still uncertain about the presence or absence of President Jovenel Moïse at this celebration. Meanwhile, the radical opposition announced a city mobilization and the celebration of the funeral, in Place d'Armes, of Cénoble Mécène, killed during the clashes between police and demonstrators, actions aimed at preventing the arrival of the Head of State.
The Coalition of the Associations of Young Leaders of the Artebonite, in a letter dated 19 December addressed to Mgr. Yves-Marie Péan, Bishop of Les Gonaïves, asked not to celebrate the Te Deum on 1 January to avoid, according to the Coalition, "that this beautiful traditional Mass on the first day of the year becomes the pretext of a renewed oppression against those who fight for another system of government". "We still do not know the position of Bishop Péan" they wrote after Christmas. On December 31, the official news that the President would not go to Les Gonaives was made public because he had decided to celebrate the national holiday in Port au Prince.
The local press interpreted the gesture of Mgr. Péan, who was supposed to preside over the Eucharist on January 1 and instead kept the doors of the Cathedral closed, as a sign of solidarity with the government, while others remembered his words during last year's Te Deum, when he stressed the "failure of political institutions, the collapse of economy, widespread corruption, arrogant impunity and lack of respect for the sacredness of life" (see Fides, 3/01/2019 ).
President Jovenel Moïse's message, presented to the country yesterday, promises changes in Haiti. These are his words: "In 2020 we are committed to interrupting this cycle of uncertainty, to restore peace in the streets and in homes, to protect our children on the way to school and in their daily lives, to fight armed gangs and to initiate this inter Haitian dialogue, necessary and so urgent. "
On December 27, the United Nations Office for the Coordination of Humanitarian Affairs (OCHA) informed that, at the end of 2019, the number of Haitians living in food insecurity was over 3.7 million, i.e. has experienced a 32% growth compared to the end of 2018. Of these, 2.6 million suffer from "acute and critical insufficiency with severe malnutrition" (phase 3 on scale 5 of the IPC - International Planning Committee for Food Sovereignty) and 1.046 million (rural and urban context), are in a "humanitarian emergency" situation (IPC phase 4) which affects about 35% of the population of Haiti.
The United Nations agency has warned that the number could reach 4.2 million in March 2020, including 1.2 million in a humanitarian emergency. It also said that in 2020, 4.6 million Haitians (including 45.5% children), almost 40% of the population, will need humanitarian aid, largely blocked due to lack of local management or corruption (see Fides, 20/12/2019). (CE) (Agenzia Fides, 2/1/2020)

AMERICA/CHILE - The Bishops: the reawakening of Chile cannot be seen, the requests of the population have still not been fulfilled

AMERICA/NICARAGUA - The Church complies with anti-covid-19 standards, while the government promotes gatherings of people

ASIA/INDIA - Connection and compassion: Caritas at the forefront in the fight against the coronavirus

AFRICA/SOUTH SUDAN - A Bishop: "Facing fear with a generous heart", to contain the impact of COVID-19