ASIA/CAMBODIA - A missionary: "Communicating the Gospel and accompanying the population towards a path of fullness" 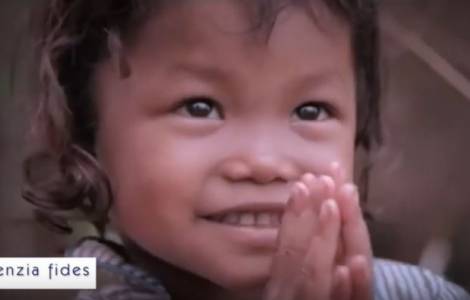 2020-10-22
Apostolic Prefect Figaredo: "The poor and the little ones evangelize us"

2020-09-04
Towards a missionary October: the support of "Catholic Mission" Australia for people with disabilities

Phnom Penh (Agenzia Fides) - "With a spirit of service, we must communicate the message of salvation of the Gospel and accompany the population towards a path of fullness of life". This is what Father Mario Ghezzi, missionary of the Pontifical Institute for Foreign Missions (PIME) said in an interview with Agenzia Fides, who for seventeen years worked in Cambodia, talking about the challenges of the local Church in the construction and human and social development of the country. PIME missionaries arrived in the Country in 1990, and their activity takes place in the apostolic Vicariate of the capital, Phnom Penh and in the apostolic prefecture of Battambang: "In recent decades, the Cambodian Church has experienced a slow but concrete rebirth", explains father Ghezzi. "Gradually - he continues - the Khmer Christian communities strengthened, followed spiritually first by catechists and then by priests. Now there are 700 catechumens".
In each community there are usually three commissions on which the different activities depend: "The first commission - says Fr. Mario - deals with liturgy and prayer; the second is in charge of catechesis and Christian formation; the third organizes assistance to the poor and the sick, in collaboration with Caritas and other organizations which are active in the health sector".
Two thirds of the 25,000 Cambodian Catholics are of Vietnamese origin: "The rivalry among the communities reflects the traditional antagonism that characterizes the relationships between the two ethnic groups", reports the missionary. "Usually Khmer and Vietnamese, even Catholics, live divided, even if the only language allowed in the liturgy is Khmer", notes Fr. Ghezzi. "The difficulty - he notes - is precisely that of facilitating collaboration between the Khmer community and immigrants, who are generally more active".
Relationships with other religions are friendly. For over ten years, a Council of Religions for Peace has been active, which includes the Bishop of Phnom Penh and the Apostolic Prefects of Battambang and Kompong Cham: "Leaders meet regularly with the heads of the two Buddhist denominations present in the country", reports the priest of PIME. Contacts with other Christian denominations, on the other hand, continue at a local level. "In Kompong Cham, - he continues - the 15 Christian denominations meet monthly for a moment of common prayer". "The Protestant communities, almost non-existent before 1975, are now growing rapidly - notes the religious - also facilitated by the fact that their catechumenate and the formation of their pastors require a shorter time than Catholics".
After the tragedies of the past, linked to the regime imposed by the Khmer Rouge, Cambodia is looking for a new national and cultural identity: "The various groups that make up society - remarks Fr. Mario – need formation based on honesty, generosity and respect for life. Particular attention must be paid to the younger generations", he adds. "The Cambodian Church - underlines Fr. Ghezzi - knows she is called to an active role in society". "Great challenges await her - he concludes - but the determination of her pastors and the enthusiasm of her communities are the sign of a faith capable of offering concrete support for this journey".
Independent since 1953, Cambodia is one of the smallest states on the Asian continent: it has a population of 18 million. 95% of the population is of Khmer ethnicity, with Vietnamese and Chinese minorities. Buddhism is the predominant religion (98%), but Muslim minorities also exist. The Catholic community is made up of about 25,000 faithful. (ES) (Agenzia Fides, 21/12/2019)