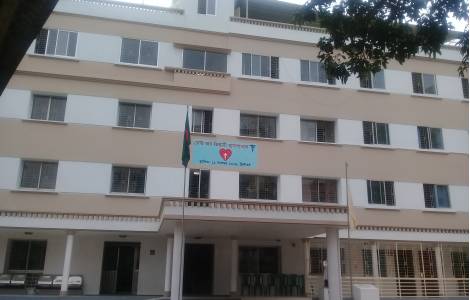 2020-01-16
Formation and interreligious dialogue: the priorities of the diocese of Khulna

2019-11-19
Humanitarian aid after the cyclone: appeal of "Catholic Relief Services"

Dhaka (Agenzia Fides) - A new Catholic hospital has opened its doors in Dhaka, offering quality health care and services: we are talking about the St. John Vianney Hospital, recently built in the archdiocese of Dhaka and inaugurated in a ceremony held in November in the presence of Interior Minister Asaduzzaman Khan Kamal, of the Archbishop of Dhaka, Cardinal Patrick D'Rozario and of the Apostolic Nuncio Mgr. George Kocherry.
As Agenzia Fides learns, Cardinal Patrick D'Rozario, who is also President of the Catholic Bishops' Conference of Bangladesh (CBCB), at the inauguration said: "The Catholic Church in Bangladesh had established a hospital in 1952, but then the structure was handed over to the government in 1974 and nationalized. People, however, had in their hearts the expectation of a Catholic hospital in the city of Dhaka, and today this expectation has been fulfilled: "This hospital will provide health services to people of all religions, ethnic groups, caste, culture. We will do our best to offer quality care and services. Even needy people will get attention in our hospital. "The Cardinal continued: "St. John Vianney will work by protecting certain universal values such as life and human health, respect and love, affection and care, self-sacrifice and service, honesty and loyalty. These will be the values lived within the institution".
The hospital has already won the hearts of patients. Marjana Begum, 45, a Muslim woman who was treated at the institute, told Fides: "The behavior of the doctors and staff of St. John Vianney hospital was exemplary. The doctor visited me, looked after me and gave me good advice. I am very satisfied with the treatment I received, both at a human level and at a health level".
A Catholic patient, Suhel Costa, tells Fides that he brought his sick son, who is now well: "I had a good experience and I spoke well of St. John Vianney hospital with everyone. Medical costs are also quite low".
As reported to Fides by Dr. Edward Pallab Rozario, engaged in the Catholic hospital, there are currently only 20 beds and 20 doctors in the facility, but "other doctors are interested in serving in this missionary hospital as volunteers. The future is bright".
In Bangladesh, getting quality medical care is a big challenge, especially for those in need. In the country there is, on average, one doctor for every 2,500 patients. The wealthiest people often go abroad for better care. According to the Yearbook of the Catholic Church in Bangladesh, the Catholic Church, in eight dioceses, runs five hospitals and 70 dispensaries. (FC) (Agenzia Fides, 19/12/2019)

ASIA/SINGAPORE - Coronavirus: Masses and meetings suspended indefinitely in the Archdiocese of Singapore

AFRICA/NIGERIA - Guanellian missionaries' commitment towards the disabled: "To promote the dignity and integral development of the person"

ASIA/KAZAKHSTAN - The Ark Village for the education of orphaned children, with the support of volunteers