OCEANIA/PAPUA NEW GUINEA - Children of today, our guardians of tomorrow 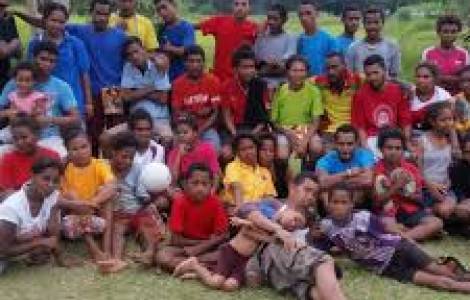 2020-10-01
In Rabaul inauguration mass for the first local Archbishop, descendant of Blessed ToRot

2020-09-17
Independence Day: the partnership between State and Church is the cornerstone for the foundation of the nation

2020-09-05
Catholics engaged in prevention campaigns and health services, vital during the pandemic

2020-09-04
Celebrating the Time of Creation with the awareness that when our world is sick, we also get sick

Bereina (Agenzia Fides) - "Children, what would you like to do today? It was fun to ask this question to our students of the Jesus Good Shepherd Primary school just after the flag-raising and prayer, to celebrate the rights of children", says to Agenzia Fides Sister Giovanna Bordin, a missionary of the Cavanis Fraternity Jesus Good Shepherd in Bereina. In recent weeks, Bereina celebrated the International Child Rights Day approved by the United Nations General Assembly in New York in 1989.
Sr. Giovanna continues: "The answers of our children: to play; dance; to eat sweets; watch a film. It was a beautiful day that gave us the opportunity to do something special for our children, to put them at the center and to encourage them in their school work. Unfortunately, very often here in Papua New Guinea the rights of children are written only on paper and not respected in everyday life".
The tragic situation is confirmed in a report released by a group of NGOs "Save the Children", "Child Fund", "Plan International" and "World Vision", which revealed the endemic spread of domestic and juvenile violence in Papua Nuova Guinea. The report shows that in Papua New Guinea 75.7% of children suffer violent methods of keeping discipline at home. 70% of the children interviewed said they were afraid to live in their own community, where they do not feel safe. 24% of adolescents between the ages of 15 and 19 have suffered physical violence and 10% sexual violence. The World Health Organization has found that the violence is almost always implemented or suffered by people who in turn suffered when they were young. "Women are more likely to suffer partner violence if they are poorly educated, if their mothers have been abused, if they have been abused in childhood. The risk of violence goes hand in hand with the acceptance of violence", notes the religious.
"Behind these numbers - continues Sister Giovanna - there are the faces that knock at the doors of the mission, full of anger and aggression, but also seeing the Church and the missionaries as a source of hope and healing". Commenting on the NGO Report, the missionary highlights some of the roots of domestic violence in the Pacific countries. "The first is the concept of family, which is quite extensive, so often a village is a family. This implies that 22% of children are 'adopted' informally by someone who belongs to this extended family. If on the one hand this is a form of mutual aid in the care of children, on the other it cannot be denied that there are several cases in which this adoption turns into exploitation, lack of care and abuse. Furthermore, in the societies of the Pacific, social status comes with age, so children do not count: they are expected to contribute to the family economy and respect traditional standards of behavior. The second root of widespread violence is the fact that violent behavior is so common that it is considered "normal". So both women and children do not feel the urge to ask for help. Even the widespread mentality that considers women inferior helps to normalize violence against them and against children. Studies show that when there is a certain type of violence in a family, other types of abuse also occur: for example, it is common for a husband who beats his wife to abuse even of children. The third root of widespread violence is poverty, together with forms of instability within the family. A recent report by UNICEF underlines how, in situations of economic difficulty, children are pushed to work and adults, falling into alcohol and drug abuse, do not fulfill their task of taking care of children".
Sister Giovanna concludes by urging "to pray together so that violence and abuse, ignorance and neglect of children become increasingly a priority for all of us adults, keeping in mind, as the 2019 theme of this day states, children of today, our guardians of tomorrow" (GB/AP) (Agenzia Fides, 16/12/2019)