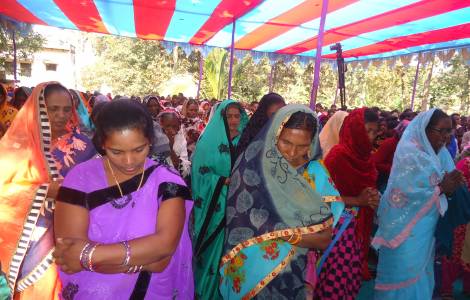 2020-03-26
Connection and compassion: Caritas at the forefront in the fight against the coronavirus

Bhubaneswar (Agenzia Fides) - In the Indian state of Orissa (or "Odisha"), in Southeast India, "the Church is close to the poor and marginalized, recognizing and working for their human dignity. There are also spontaneous conversions to Christianity. This is one of the reasons that has led to the fury that Hindu extremists have against Christians in Orissa". This was explained to Agenzia Fides by Father Robert Digal, an Indian Catholic priest from the Kandhamal district in the Indian state of Orissa, the scene of atrocious violence in 2008, when Christian communities suffered an indiscriminate mass attack which caused about 100 deaths and 56,000 displaced persons.
Orissa is one of the most backward and poorest states in India, with about 36 million inhabitants, of whom 40% are out caste or tribal, two categories marginalized and discriminated against by Indian society. Father Robert tells how his family was also victim of violence in that first tragic attack 11 years ago: "My sister – he recalls - in that year had decided to get married and we have the tradition of giving presents to the bride and groom before their wedding. Everything we bought was stolen and our house was set on fire. My family members were forced to take refuge in the forest for five days".
"To date the situation in the state of Orissa is still precarious", said Fr. Digal to Fides. "Over 10,000 people have not yet returned to their homes. About 6,500 houses and 395 churches have been destroyed".
Sporadic violence continues: according to the "United Christian Forum" (UCF) and the "Alliance for Defending Freedom" (ADF) - organizations committed to defending the life and rights of Christian communities in India - at the end of October in a village a few kilometers away from the capital, a group of militants broke into the homes of nine Christian families, burning Bibles and other Christian literature in front of the statue of a Hindu deity.
In a spiral of hatred and violence perpetuated against Christians, however, positive signs can be seen: in recent weeks, in fact, the Supreme Court of India has ordered the release of five Christians sentenced to life imprisonment because they were accused of having organized, in August 2008, the assassination of Hindu leader Swami Laxanananda Saraswati. "That murder - clarifies Fr. Robert - for Hindu extremists, was the pretext to start the massacres that took place in Kandhamal". "The question has not yet been closed - he underlines - for the moment there is only the provision of a bail; now the attention must be addressed towards the High Court of Orissa, where an appeal process is underway", he adds. "The regional government is working to give protection to the faithful, who still live in fear", explains the Indian priest. "The Christians of Orissa - notes Fr. Digal - still suffer from this situation, but they are strong and united in faith: every prayer is a request for peace and reconciliation".
The priest concludes: "The Constitution of our Country guarantees the freedom to practice Christianity and any other religion. There are many churches in India, as well as schools, charitable institutions and hospitals that serve people of all faiths without distinction. However, although the Church plays a significant role in social and human development through its institutions, deeply rooted prejudices against Christians remain in Indian society". (ES) (Agenzia Fides, 14/12/2019)