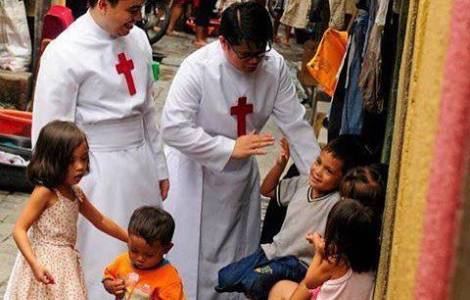 Maumere (Agenzia Fides) - The island of Flores recently celebrated the ordination of the first Camillian priest. After ten years of presence in Indonesia, the Ministers of the Sick (MI) also have their first priest. We are speaking of Father Mensianus Aman, ordained priest along with six young Carmelites by Bishop Mgr. Edwaldus Martinus Sedu in the parish of Maulo, part of the diocese of Maumere, on the island of Flores. The news was given to Agenzia Fides by Father Luigi Galvani, pioneer of the Camillian mission of Flores.
"Father Aman - says Fr. Galvani - comes from a peasant family in the mountainous area of the island of Flores and has a brother priest of the Institute of Verbites, a missionary for several years in Chile. After completing his studies in philosophy and theology in the country, in preparation for the his priesthood he attended pastoral courses in Manila. With his ordination the Camillians of Indonesia will begin to dream of being able to count on other candidates for priesthood every year".
In the two houses of formation of Maumere and Ruteng there are currently 7 priests, 15 young religious, 6 novices, 42 students of philosophy and 24 new candidates including two young people from Pakistan and one from East Timor.
Fr. Luigi explains: "Indonesia, which remains the most populous Muslim country in the world, is becoming a promising oasis of religious and priestly vocations. In fact, the continuous opening of new religious communities and seminaries is the clear testimony of this favorable moment. On the island of Java, for example, the Theological Faculty of Jakarta houses about 300 students, in Jogjakarta there are 330 and in Malang another 320. On the island of Timor, in Kupang the Theological Study has about 300 seminarians. But above all in Maumere, on the island of Flores, one is impressed to see the largest philosophical and theological Seminary of the Catholic Church in the world, led by the Divine Word missionaries, with more than a thousand seminarians".
"If in the past decades Indonesia had been a destination country of evangelization, now it is giving back this gift to the nations with the sending of its missionaries" - the Camillian further specifies. "In fact, several dozen Indonesian missionaries from various religious institutes, with the Verbites in the front row, reach other countries of the world each year to carry out pastoral and missionary service. This also seems to be the future goal of the Indonesian Camillians who, in addition to the task of preparing 'new workers for the Lord's vineyard', propose to spread the evangelical message and the charism of love of St. Camillus inside and outside the country". (LG/AP) (Agenzia Fides, 12/12/2019)