AMERICA/HAITI - The Bishops: "it is unacceptable that some live in arrogant and scandalous opulence and the majority languish in shameful poverty" 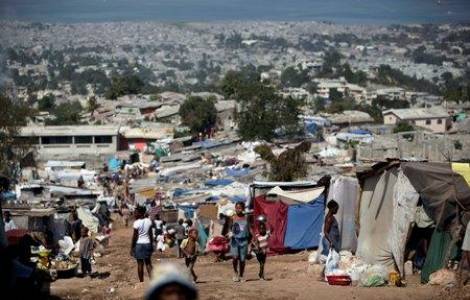 2019-12-04
Chaos and violence, an injured woman praying in church: testimony of a missionary

2019-12-03
The Bishops: "it is unacceptable that some live in arrogant and scandalous opulence and the majority languish in shameful poverty"

2019-10-23
"Listen to the voice of wisdom": the appeal of the Bishops to the President and the government in the face of the suffering of the people

2019-10-04
The opposition is firm in its request for the resignation of the President, an increasingly serious situation

Port au Prince (Agenzia Fides) - As preparation for the Christmas celebration, the Bishops of the Episcopal Conference of Haiti have published a message asking the authorities and opposition leaders to be self-critical and to think about the good of the people, to reach solutions that have historical repercussions for the harsh reality of the Haitians.
40 people have died in these last two months of demonstrations and protests, which often end in violent clashes, to demand the resignation of the President of the Republic Jovenel Moïse. "We cannot live in a country where there are no roads, no water or hospitals. We have no service", one of the protesters told the international press.
In the message, sent to Fides, the Bishops of Haiti express their solidarity with the suffering of Haitians: families that live in mourning after losing some of their members, those who are hospitalized for serious health problems, those who have lost their properties and those who have had to leave their homes.
"We need a change that must lead to a new Haiti, freed from the usual evils that have always struck it and which today reach an intolerable intensity. We cite among other things: unemployment, poverty, insecurity, exclusion, impunity, moral delinquency, manipulation, corruption, repression and violence", reads the text.
The description of the situation is very clear and the Bishops comment on it according to the believer's vision: "We know that it is not the will of God. The system desired by God, and that we desire, is that which takes into account the common good, the welfare of all citizens, offering them equal opportunities.This system must also be attentive to the suffering of the most vulnerable, promoting their integral development and putting in place mechanisms that promote an equitable distribution of wealth. Because it is unacceptable that some live in an arrogant and scandalous opulence and that the vast majority languish in shameful misery", the Bishops denounce.
Therefore they highlight people's trust, courage and the ability to move forward with determination, despite realities like unemployment, poverty, insecurity, exclusion, impunity and the effects of criminal actions. For the Church this situation must lead to a new Haiti.
In conclusion, the Bishops reflect on the mystery of the Incarnation as a historical turning point: "the Son of God became man, God made him the Liberator, the Savior of humanity. Yes, we are at a historical turning point in our evolution, as a people and as a nation, to change our regime and our system".
"Let us pray for you all, for the great protagonists of the political scene of the moment, so that the Child God will inspire them and that, thanks to the sense of commitment, we can arrive at a normalization of national life, for a Christmas of joy and peace. A Christmas of this type will also be the beginning of a good and happy new year for all": with these wishes the Bishops conclude their document, signed on November 30, and published for the beginning of Advent.
The situation in the country is increasingly tense, universities and schools are still closed. The demonstrations of social and political groups against the authorities of the current government continue one after the other. This time it seems that the whole population speaks against the President's policy. However, President Moise reiterated that he has no plans to resign from the post he has held since 2017. The constitutional period for which he was elected is five years, he recalled (see Fides, 23/10/2019).
Although the problem of fuel supply has been solved, a cause that triggered the first popular protests, Haitians continue to demonstrate against corruption and lack of services, as well as the cost of living (see Fides, 4/10/2019). In this situation not even the NGOs and Catholic bodies, such as religious congregations, Caritas or Catholic Relief Services, manage to carry out their service, indeed, their seats were looted and the violence of some groups of protesters prevented their work (see Fides, 1/10/2019). (CE) (Agenzia Fides, 3/12/2019)