AFRICA/SOUTH SUDAN - Comboni Missionaries: "To accompany the population towards a path of peace and reconciliation" 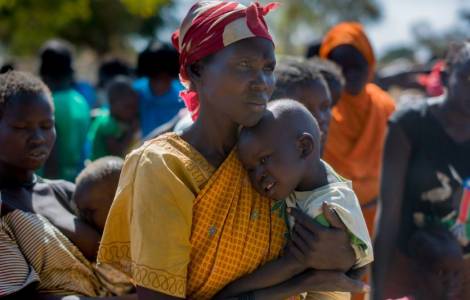 2020-01-17
The Bishop of Tombura-Yambio to politicians: "True leadership is in favor of young people"

2019-12-13
The Catholic community celebrates the appointment of the Archbishop of Juba, apostle of peace

2019-12-11
Prayer and service for peace: priestly ordination in the diocese of Tombura-Yambio

Juba (Agenzia Fides) - "South Sudanese leaders have a moral obligation towards their citizens to promote real prospects for peace, development and democracy in the country". This is what Father Daniele Moschetti, a Comboni missionary, says in an interview with Agenzia Fides, commenting the difficult situation that South Sudan is currently facing. A little over a year after the peace agreement signed in Addis Ababa by President Salva Kiir, and rebel leader, former vice president Riek Machar, to end the bloody civil war that broke out in December 2013, there are still many questions to be solved in the African country: "The clashes between the various factions continue and many roads are impassable: the only internal connections are air travel", reports Fr. Muskets.
"Furthermore - he adds - the violent floods in the last few weeks have put a strain on an already compromised reality, affecting large areas of the territory and swallowing entire villages". The situation is made even more dramatic by the humanitarian crisis that afflicts the majority of the population: "Resources are lacking to guarantee the necessary assistance and protection, the number of displaced people is impressive: over three million South Sudanese have fled their homes since December 2013, trying to reach other regions or neighboring countries in search of food and security and over 200,000 internally displaced people are living in UN camps for fear of retaliation and violence". The emergency concerns mainly children: "The country's future is deeply at risk: 63% of refugees are children who have had no access to education".
Father Daniele was provincial superior in South Sudan for seven years and a book was written from this experience a few years ago. "Independence - he observed - did not mean a better life for the population in South Sudan, to date the country is still characterized by profound differences: political divisions and power games - he points out - have undermined the possibility of starting peaceful coexistence among the different peoples that make up the ethnic mosaic of this country and who have always lived in separate groups with a strong sense of tribal rivalry". During these years the Catholic Church has always made its voice heard and has been close to the population. "On the eve of independence - says the missionary - the Church launched a campaign to build a deeper sense of citizenship. The goal was to develop a sense of nationality and help create a country where all inhabitants were treated with equal dignity and justice".
"Recent events in South Sudan have shown that freedom is not a sufficient condition for peaceful coexistence, to guarantee worthy living conditions and equal rights for all". Today, in fact, after the postponement of a further hundred days starting since last November 12th - deadline set for the formation of a transitional unity government - there are no positive signs: "The opposition - reports Fr. Moschetti - called for a three-month postponement with the motivation of three main issues: security, the integration of recruits, the formation of a national army and the administration of the new 32 states".
Currently, the Church, missionary and religious congregations in the country are again "on the front line" to promote the process of reconciliation: "Building peace and human healing are among the main goals that the Association of Religious Superiors of South Sudan, which includes 46 congregations, is trying to reach through the center for human and spiritual formation", says Fr. Daniele. Founded in 2016 in Rejaf, near the first mission of the Comboni missionaries in South Sudan, which dates back to 1919, in this center "the missionaries are committed to treating the traumas caused by war and violence within the communities", he explains. "Through spiritual retreats, seminars and training courses - concludes the Comboni Missionary - we give support to people from different tribes to meet, get to know each other, overcome prejudices and share not only fears and suffering, but also different cultural heritages and aspirations for the future". (ES) (Agenzia Fides, 30/11/2019)

ASIA/INDIA - The new law on citizenship to immigrants "is unconstitutional": appeal to "civil disobedience"

AFRICA/SIERRA LEONE - A missionary: "Seventy years of mission in Sierra Leone are our hard work, but also our joy"

AFRICA/DR CONGO - "No to new wars"; a cry of alarm of the Bishops of the DRC, Rwanda and Burundi