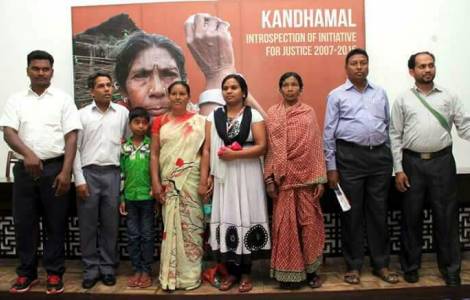 2021-01-21
Violence and discrimination against Christians increase in 2020, "Anti-conversion laws" are extended

New Delhi (Agenzia Fides) - The Supreme Court of India has decided to release on bail five Christians sentenced to life imprisonment, who have been in prison for 11 years, charged with the murder of the Hindu swami Laxamananda Saraswati in 2008. That murder, attributed to Christians by Hindu fundamentalists, triggered the sectarian violence in Kandhamal in 2008.
The five innocent men are Bhaskar Sunamajhi, Buddhadev Nayak, Durjo Sunamajhi, Sanatan Badamajhi and Munda Badamajhi obtained bail from the Supreme Court after their bail applications had been postponed several times. In recent months the same court freed Gornath Chalanseth, and also to Bijaya Sanaseth. They had been in jail since 2008, with a life sentence handed down in 2013.
Release on bail for the seven Christian was the result of a relentless effort by supporters, church authorities, human rights activists and prayers all over the country.
Colin Gonsalves, lawyer and founder of the NGO "Human Rights Law Network", who leads a team of lawyers committed to defending the Christians of Kandhamal, told Fides: "We are happy that they were released on bail and can spend Christmas with their families".
"This is a great victory for truth and justice for Kandhamal", commented to Agenzia Fides journalist Anto Akkara, author of the acclaimed investigative book "Who Killed Swami Laxmamananda?" who, with a documented inquiry, exonerates Christians.
"The question is not closed. For now there is only the provision of a release on bail, and after 11 years. Now the focus must be on the Supreme Court of Orissa, where an appeal process is underway. The innocent must be acquitted", emphasizes Akkara.
Akkara also launched an online petition in 2016 with the website www.release7innocents.com. Each online signature on the website generates four instant e-mails addressed to the Minister of Justice of India, the President of India, the Supreme Court of Orissa, the National Commission for Human Rights. Akkara also produced the documentary "Innocents Imprisoned" in 2018 on the tenth anniversary of the events in Kandhamal. Activist Akkara notes: "Only an independent investigation can reveal the political conspiracy behind Kandhamal's fraud that led to the murder of the 81-year-old Laxmanananda. This will open the way to identify and punish the real culprits and compensate the innocent", said Akkara.
John Dayal, a human rights activist, told Fides: "Here the question of Christians and Pastors arrested or convicted on false charges of forced or fraudulent conversions begins".
The murder of Laxmanananda and four other people in his Ashram in the Kandhamal district (August 23, 2008) was defined by the extremists of the Sangh Parivar as a "Christian conspiracy". The wave of violence against Christians in which 100 people were killed, created 56,000 homeless, while 300 churches and 6,000 Christian homes were ransacked and burned. (SD) (Agenzia Fides, 28/11/2019)