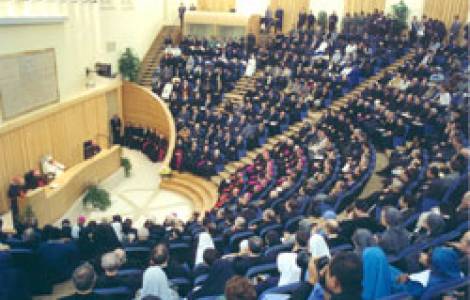 Vatican City (Agenzia Fides) - The International Conference "From Maximum illud to Evangelii Gaudium", "on the urgency of the Church's missionary transformation", promoted and supported by the Congregation for the Evangelization of Peoples, will end on November 29 (see Fides, 26/11/2019).
After the greetings of Prof. Leonardo Sileo, Rector of the Pontifical Urbaniana University, the first report in program, on the "Criteria of discernment for the missionary transformation of the Church" was held by Cardinal Fernando Filoni, Prefect of the Congregation for the Evangelization of Peoples and Grand Chancellor of the Pontifical Urbaniana University. The Prefect of the Missionary Dicastery developed four themes: evangelization makes the Church Universal; personal encounter with Jesus Christ; missio as transformation of the world; Christian witness.
"A careful reading of the Apostolic Letter Maximum Illud by Pope Benedict XV (30 November 1919) allows us to better appreciate what the pontifical and conciliar Magisterium after him, up to Evangelium Gaudium, teaches about the mission, the Church and its current challenges", the Cardinal pointed out, referring to the profound missionary insights and the great transforming novelty of this document.
"Summoned by the Word of God, attracted and formed as the Church by the Eucharist - Cardinal Filoni said again, touching the theme of the relationship between evangelization and the universal Church -, all Christians, precisely because they are baptized specifically for their vocation, are permanently in a state of mission in the world only and uniquely as Church. It follows that all are missionary disciples in the concrete terms of their Christian life within a particular Church ... In overcoming all undue Eurocentrism or geographical-economic schemes of donor churches (north of the world) and receiving churches (south of the world) or ancient churches (Christian territories) and of young churches (non-Christian nations), all the local Churches are subjects responsible for the gift of faith that they themselves have received, all are donors and recipients, all are called to always go beyond their own borders".
Cardinal Kurt Koch, President of the Pontifical Council for Promoting Christian Unity, then took the floor and dealt with the theme "Foundations of the ongoing validity of the missio ad gentes". In his speech, the Cardinal highlighted that mission is an essential and inalienable aspect of Christianity, without which it would renounce its identity. Indeed, mission has a Christological foundation: Christ is the Envoy of God in the world. The mission of Christ continues in the mission of the Church with the proclamation of the Gospel, underlined Cardinal Koch. As a message of God's love for men, it is realized by attraction and not by proselytism - he reiterated -, and is perceived as credible when it is lived in ecumenical communion. These foundations of the mission were remembered to the whole Church by the Second Vatican Council and by the Popes who followed one another after the Council.
The first session was closed by His Exc. Mgr. Giampietro Dal Toso, Adjunct Secretary of the Congregation for the Evangelization of Peoples and President of the Pontifical Mission Societies (PMS), who focused on the theme: "The Pontifical Mission Societies in the Light of Benedict XV’s and Francis’s Call to “Evangelical Upgrading” of the Missionary Activity Ad Gentes". The Archbishop highlighted that every moment of celebration also serves to look at today and tomorrow, therefore he recalled that in these hundred years the Pontifical Mission Societies have accompanied, supported and promoted the Church's missionary activity with an enormous, shared effort at a universal level, in close collaboration with the Congregation for the Evangelization of Peoples. All this has contributed to that wonderful flowering in the young Churches to which we can assist today. With the words of Pope Francis, the PMS are "a global network that supports the Pope in his missionary commitment with prayer, the soul of the mission, and the charity of Christians scattered throughout the world" (Message for World Missionary Day 2019).
The theology of mission remains fundamental to understanding the role of the PMS and, specifically, the theme is addressed in the light of the concept of logos. There are three principles that govern the existence of the PMS, specified Archbishop Dal Toso: the participation of the faithful, the missionary spirit and the universality of the Catholic faith. A deepening of the nature of the same from a canonical point of view will help the renewal process that Pope Francis has repeatedly asked the PMS in recent years. (S.L.) (Agenzia Fides, 27/11/2019)