OCEANIA/PAPUA NEW GUINEA - "Let us remain united as one people": referendum on Bougainville 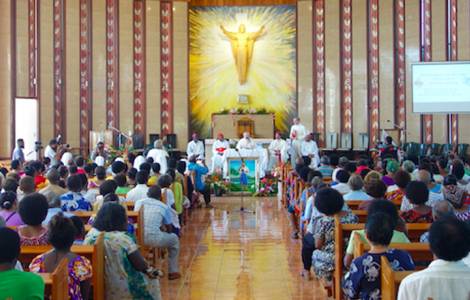 2020-10-27
Missionary Month, a circle of friendship, closeness and support: "Do not be afraid to say yes to God"

2020-10-01
In Rabaul inauguration mass for the first local Archbishop, descendant of Blessed ToRot

2020-09-17
Independence Day: the partnership between State and Church is the cornerstone for the foundation of the nation

2020-09-05
Catholics engaged in prevention campaigns and health services, vital during the pandemic

2020-09-04
Celebrating the Time of Creation with the awareness that when our world is sick, we also get sick

Bougainville (Agenzia Fides) - After twenty years of bloody civil war, which claimed 15 thousand victims, the referendum for the independence of the island of Bougainville from Papua New Guinea was launched. The referendum, which takes place between November 23 and December 7, 2019, provides for a consultation that will last two weeks. However, the Catholic Professionals Society of Papua New Guinea, a body of Catholic professionals, are worried about some comments where there are doubts regarding the validity of the Constitution of Bougainville. "Freedom of speech is a guaranteed right of every citizen, including those of Bougainville, but caution is needed on the dissemination of opinions regarding the referendum currently underway", reads a note from the organization, sent to Agenzia Fides. "We want to warn those who publicly comment on the referendum. We are not aware of the constitutional legal basis for such comments. However, we believe that all the actions taken so far are conducted in line with the national Constitution", emphasizes President Paul Harricknen.
"2019 is the 14th anniversary of the formation of the government of Bougainville and, under the current law, it is the year of the referendum. Our society recognizes that the operational part of the peace agreement belongs to the national Parliament, so that the outcome of the referendum takes effect within a certain period of years" - explains Harricknen. "We all want to remain united as one people, one nation, one country, and we must allow the constitutionally sanctioned referendum on Bougainville."
Large uncertainties remain on the consequences: independence will not be an immediate process but there are those who think that a decade of negotiations between the local government and that of Papua New Guinea may be necessary.
Bougainville is the principal of a group of islands where about 250 thousand people live. During the twentieth century, it was first occupied by the Germans, then by Australia, then by the Japanese and then again by Australia, after the Second World War. At the end of the 1940s, it became part of the Territory of Papua New Guinea, which gained independence from Australia in 1975. (AP) (Agenzia Fides, 27/11/2019)