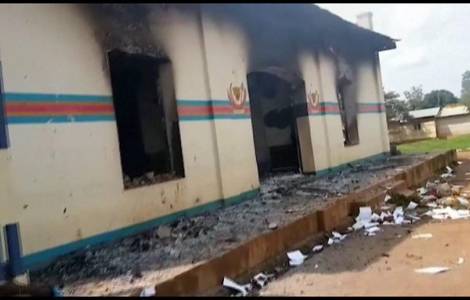 2020-01-03
Visit of Cardinal Ambongo among the populations of the east, victims of massacres

Kinshasa (Agenzia Fides) - "The National Episcopal Conference of Congo (CENCO) is very concerned about the insecurity in the east of our Country, in particular in the provinces of North Kivu and South Kivu, due to the resurgence of violence and murders. The strong influx of displaced persons increases the suffering of populations already impoverished and traumatized by kidnappings, the almost permanent presence of armed groups and the Ebola epidemic", says the message sent to Agenzia Fides on 25 November, signed by Mgr. Marcel Utembi Tapa, Bishop of Kisangani and President of CENCO.
The provinces of North Kivu and South Kivu, in the eastern part of the Republic of Congo, have for years been the scene of a humanitarian crisis fueled by permanent insecurity. The population exacerbated by the situation has attacked the institutions that have failed in their mission to protect it, including MONUSCO, the United Nations Mission in the DRC (see Fides, 25/11/2019).
According to what was communicated to Fides by the local NGO, CEPADHO, the episode that sparked the popular fury was the massacre of at least 8 civilians by the Ugandan terrorists of the ADF in the Masiani district, in the municipality of Mulekera, which happened around 8.30 pm, on November 25th.
"While sharing the anger experienced by the youth of Beni, CEPADHO invites the inhabitants of Beni to moderation and a sense of responsibility to avoid falling into the enemy's trap. CEPADHO condemns the violent demonstrations that led to clashes with the police, the burning of the municipality of Beni and other symbols of the State, the attacks against MONUSCO structures, the erection of barricades on the road", says a note sent to Fides .
"It is unacceptable that, for decades, the dignity of people and human life have been constantly violated, in a Country where state institutions and international organizations should protect the entire population", say the Congolese Bishops, expressing their "brotherly solidarity" and closeness to their excellency Mgr. Melchisedec Sikuli Paluku, Bishop of Butembo-Beni and Sébastien-Joseph Muyengo Mulombe, Bishop of Uvira, as well as to all the People of God who live in these regions". "In November alone 80 people were killed, without counting the wounded and those missing. It should be emphasized that these massacres are sometimes committed near the Congolese army installations (FARDC) or the police/military patrols", reports CENCO.
CENCO proposes the elaboration of an "emergency program" to put an end to hostilities, the restoration of state authority through State services such as the national army and the establishment of "national solidarity" capable of providing humanitarian aid to victims. (L.M.) (M.P.B.) (Agenzia Fides, 26/11/2019)