VATICAN - Congress at Urbaniana University: “From Maximum illud to Evangelii gaudium”, on the urgency of the Church's missionary transformation 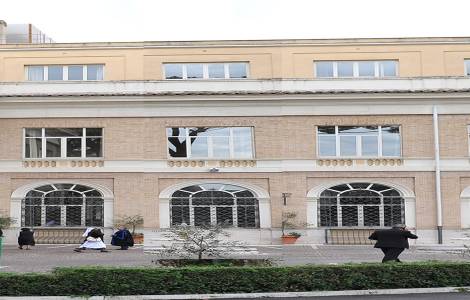 Vatican City (Agenzia Fides) - On November 30, 1919 Pope Benedict XV published the Apostolic Letter "Maximum illud" with which he gave new impetus to the common missionary responsibility by putting the Gospel of Jesus Christ at the center. To celebrate this anniversary, Pope Francis announced the Extraordinary Missionary Month of October 2019, in order to awaken awareness of the missio ad gentes and to resume the proclamation of the Gospel with new enthusiasm, urging the missionary transformation of the Church's pastoral action, expressed in the Evangelii gaudium.
The international Congress promoted and supported by the Congregation for the Evangelization of Peoples, which will take place from 27 to 29 November at the Pontifical Urbaniana University, with the title "From Maximum illud to Evangelii gaudium". In fact it intends "to reflect on the urgency to advance along the path of missionary transformation of the Church in light of the changing perception of the missio ad gentes itself, and in the context of the global and regional transformations underway". As the organizers say, "we wish to reflect on the biblical, theological and pastoral foundations of missionary action, while seeking to understand the continental/regional mission contexts because of the concreteness of the challenges they face, as well as the perspectives they open up".
The first session of the Congress, which will begin at 9 am on Wednesday 27 November, will be opened by the greetings and introduction of Prof. Leonardo Sileo, Rector of the Pontifical Urbaniana University, and chaired by Fr. Fabrizio Meroni, General Secretary of the Pontifical Missionary Union. The first report on the "Criteria of discernment for the missionary transformation of the Church" will be held by Cardinal Fernando Filoni, Prefect of the Congregation for the Evangelization of Peoples and Grand Chancellor of the Pontifical Urbaniana University, while Cardinal Kurt Koch, President of the Pontifical Council for Promoting Christian Unity will talk about the "Foundations of the ongoing validity of the missio ad gentes". This first session will be concluded by His Exc. Mgr. Giovanni Pietro Dal Toso, Adjunct Secretary of the Congregation for the Evangelization of Peoples and President of the Pontifical Mission Societies, who will deal with the theme "The Pontifical Mission Societies in the Light of Benedict XV’s and Francis’s Call to “Evangelical Upgrading” of the Missionary Activity Ad Gentes".
In the following sessions the fundamental themes of the Church's missionary action will be discussed, from the "key words" of evangelization to the "missionary vocation of the laity and ecclesial movements", "Local Churches, Religious Congregations, Missionary Institutes", to the "Strategic role of ecclesiastical studies for a Church out on mission". Ample space will be reserved for the presentation of "contexts of mission" in the various continents, highlighting challenges and hopes. The concluding session, on November 29, chaired by Prof. Luca Pandolfi, Director of the Higher Institute of Catechesis and Missionary Spirituality (ISCSM) provides for the contributions from the Professors of the Pontifical Urbaniana University. (S.L.) (Agenzia Fides, 26/11/2019)

ASIA/PHILIPPINES - Cardinal Tagle: "Announcing the Gospel means communicating the presence and compassion of Christ with life"

VATICAN - Conference at Urbaniana University: a Synodal Church on a mission on new world scenarios