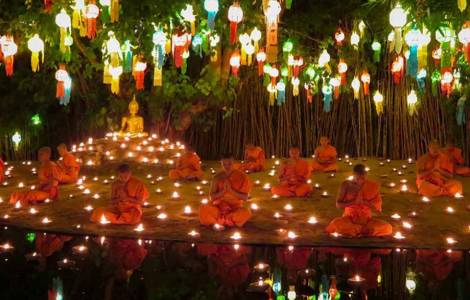 2019-11-22
A missionary: "The Pope invites the Thai faithful to move from the Gospel to life and from life to the Gospel"

Chiang Mai (Agenzia Fides) - "It was an extraordinary experience. People were motivated, prepared and aware of the exceptional nature of the event. The last visit of a Pope dates back to 35 years ago. The parishes did their best to organize and participate. Even from the distant borders of the north, perhaps with days of travel, they travelled, despite the rice harvest season, fundamental for the livelihood of rural populations": this is what Don Attilio de Battisti, fidei donum missionary in Chiang Mai, says to Agenzia Fides, who takes stock of the extraordinary visit of Pope Francis to Thailand.
"The Catholic world endeavored to proudly show its faith, its symbols, its rituals, its references. The Buddhist world tried to comment, present and explain to the population the contents of the Catholic religion and its history. All were enchanted by the prophetic gestures of Pope Francis on several occasions. They are unusual gestures in Thai culture, very solemn and rigid about the protocol. State television channels, radio stations, social networks were filled with photos, live coverage, gestures and expressions of the Holy Father in the various official meetings".
Don Attilio explains: "The whole of Thailand showed the best of its style and culture. Seen from the outside, a formal Thailand emerges. In reality, the spirituality and lifestyle of the ordinary Thai is sober and well-rooted in traditions. The Pope showed that he knows the sensitive keys of the people, even highly placed, very well and highlighted values and merits without neglecting exhortations and pastoral indications. The linguistic barrier (the Pope always spoke in Spanish) will oblige to reread and resume many crucial passages. They were two very intense days.
The missionary writes to Fides: "It must be recognized that the local Church not only organized a complicated event very well, but also how to better enjoy the missionary value of the visit. It prepared materials which were distributed free of charge to all, managed communication with great competence and precision, involved schools, groups, companies. Even the simple people wanted to put in place what they had: scooters to transport pilgrims free of charge, people were given food and drink, everyone decorated streets, students enlivened small squares and parking lots, the Bangkok school facilities remained closed to make room for tired travelers and groups from far away".
The missionary concludes by saying he is "happy and fortunate to have participated in this visit. Despite the small size of the Catholic community in this country, once again the spirit of collaboration and love for the good of the entire nation emerged, as well as for "guests". Thousands arrived from Vietnam, Cambodia, Malaysia, Laos, countries that can hardly welcome the Holy Father for political reasons. People from Myanmar, who recently welcomed the Pope, also wanted to participate. Many bishops of the Federation of Episcopal Conferences of Asia gathered for a meeting with the Pope. Not least, God blessed us even with a decidedly moderate and tolerable climate". (AdB/AP) (Agenzia Fides, 25/11/2019)