ASIA/THAILAND - Pope Francis: a missionary is not a "mercenary of the faith" 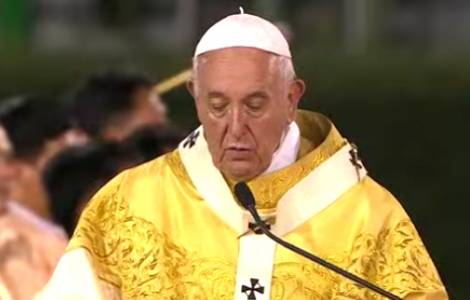 2020-12-23
Testimony of a missionary: "The sense of the common good of the Thai people: we are ashamed of contributing to the malaise of others"

2020-11-28
The protest of the "yellow ducks": democracy and fewer privileges to the Crown

Bangkok (Agenzia Fides) - A missionary "is not a mercenary of the faith or a producer of proselytes". He is rather a humble mendicant who feels the absence of brothers, sisters and mothers, "with whom to share the irrevocable gift of reconciliation that Jesus grants to all". This was underlined by Pope Francis during the Holy Mass celebrated at the Supachalasai National Stadium in Bangkok, during the second day of his apostolic visit to Thailand. "The missionary", added the Bishop of Rome, "knows that evangelization is not about gaining more members or about appearing powerful. Rather, it is about opening doors in order to experience and share the merciful and healing embrace of God the Father, which makes of us one family".

During the homily, the Pope stressed the dynamism of the Christian mission, incomparable to any form of cultural or religious propaganda, starting from the experience of the first missionaries who set foot in these lands of Siam: by hearing the Lord’s word, they came to realize that they were part of "a family much larger than any based on blood lines, cultures, regions or ethnic groups". And for this reason, "impelled by the power of the Spirit, their bags filled with the hope brought by the good news of the Gospel, they set out in search of family members they did not yet know". They set out to seek the faces of "so many Thai mothers and brethren who were still absent from their Sunday table".
In the encounter between the Christian proclamation and the human riches of different peoples - the Pope said - the Holy Spirit embellishes the Church with the new expressions of people who welcome the free gift of the Gospel. Even in the land of Thailand, the first missionaries went not only to share with them everything that they themselves could offer, but also to receive what they needed "to grow in their own faith and understanding of the Scriptures". Without this encounter between the heralds of the Gospel and the local populations, Christianity itself "would have lacked your face; it would have lacked the songs and dances that portray the Thai smile, so typical in your lands". Thus - stressed the Pope - even the missionaries came to understand more fully the Father’s loving plan, which is greater than all our human calculations and predictions", and which cannot be reduced "to a specific cultural context" .
Even today, in Thailand and throughout the world, the proclamation of the Gospel moves along the same lines of predilection suggested by Christ, who was not afraid to sit at the table with sinners, those considered unclear: by letting himself be touched by them, he helped them to realize the closeness of God. Referring to the current Thai context, the Pope referred to "children and women who are victims of prostitution and human trafficking", to "young people enslaved by drug addiction" to "migrants deprived of their homes and families, and so many others, who like them can feel orphaned, abandoned, without the strength, light and consolation born of friendship with Jesus Christ". All of them - added the Successor of Peter "are part of our family, they are our mothers, our brothers and sisters. Let us not deprive our communities of seeing their faces, their wounds, their smiles and their lives. Let us not prevent them from experiencing the merciful balm of God’s love that heals their wounds and pains". (GV) (Agenzia Fides, 21/11/2019)