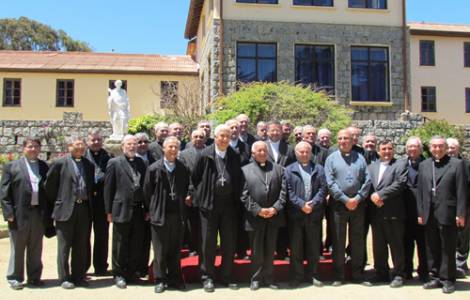 2021-01-22
Proposals for a new Chile: contributions to dialogue within the framework of the constituent process

2021-01-15
"Christ Migrant of the World": a year of help and support for migrants in the Archdiocese of La Serena

2021-01-11
New violence in Araucania: appeal of the Bishop of Temuco, "only fraternity generates social peace"

2020-12-29
The legalization of euthanasia is "a crime against human life", the dignity of the person and his fundamental rights

2020-12-23
The traditional Christmas feast for children celebrated in Rancagua, in compliance with health measures

2020-12-18
"A gesture of solidarity, at the foot of the Manger": in times of pandemic it is necessary to redouble efforts

Lo Canas (Agenzia Fides) - At the conclusion of the Plenary Assembly of the Episcopal Conference of Chile (see Fides, 13/11/2019), the Bishops published a message addressed "to the faithful and to the communities of the Catholic Church in Chile" entitled "Come, Lord Jesus" (Rev. 22,20), in which they express hope for the agreements reached in view of a new Constitution, and invite everyone to participate in the debate and announce a day of prayer for Chile on December 8th.
"We appreciate the step taken by the government and political sectors in an agreement to progress towards a new Constitution - write the Bishops in the text sent to Agenzia Fides -. It is a generous gesture that gives us hope. We hope that the new social pact will be consolidated in such a way as to open roads that will really help us to overcome the differences among brothers".
Recalling the protests and the popular discontent clearly manifested in the last month, in the face of inequalities and abuses on relevant topics such as health, environment, wages, pensions, basic services and excessive debt, the Bishops note that "there have been authorities, leaders, businessmen and political and social leaders who have not lived up to the service and responsibilities ... We too, in the Church, have disappointed many Chileans, being a cause of scandal and pain".
The statement recalls the recent pronouncements of the Bishops' Conference on the situation of the country, on the recognition of the right claims and on the condemnation of all forms of violence, reiterating the pain for the dead, the wounded, the destruction of buildings, including places of worship. "We are seriously concerned about the feeling of uncertainty and fear, the anguish of many people for not knowing what will happen tomorrow", they continue, thanking the communities, priests, religious and laity for their commitment to accompany "our people in these difficult times", offering support to those who suffer the most today", hoping that "our Church will continue to be a bridge of unity and peace, a house of protection and a common table in times of pain".
Urging to "trust in the Lord who comes", the Bishops call to intensify "four expressions of our faith at a national level, as part of our response to the situation in the country". The first is "the untiring prayer for peace and justice founded on truth and charity", with an invitation to live throughout the country a great day of prayer for Chile on December 8, the day of the Immaculate Conception, "in which we will consecrate the country to the motherly protection of the Virgin Mary in all our Eucharistic celebrations". They then urge to increase prayer for our people and to "do penance for our personal and social sins that have contributed to injustice and violence".
They, furthermore, invite to participate in every instance of civil society "for the process of a new Constitution and for a new social pact, in a climate of respect and civil friendship". All are then called to "serve, announce and denounce in the style of Jesus", offering comfort and solidarity to the poorest and most vulnerable. Finally, the fourth commitment: "The continuity of our discernment process for ecclesial renewal, opening our hearts to the signs of the times that strongly challenge us, in order to discover what God wants for Chile and for the Church at the service of all" .
The message concludes by reiterating that "only justice leads us to peace" and asking the Lord to bless the country and all its inhabitants, making them instruments of his peace and his love, to "build a great nation of brothers, where everyone has bread, respect and joy". (SL) (Agenzia Fides, 18/11/2019)