AFRICA/CAMEROON - World Day of the Poor, the Carmelites: "Closeness to the most needy is a priority for the Church" 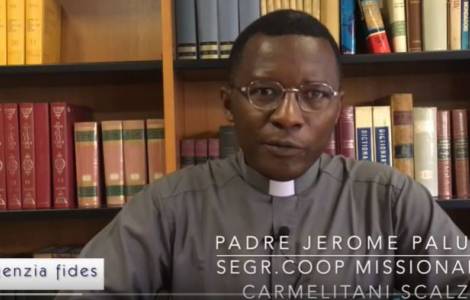 2020-02-21
Anglophone crisis: Bishops from all over the world ask President Biya to participate in peace talks

2019-11-25
Tension and violence in the northern provinces: the Church calls for inclusive dialogue

Yaoundé (Agenzia Fides) - "Currently the problem of poverty in Cameroon has worsened: there is hunger, food is lacking, prices are high due to the high rate of inflation and people find it hard to get what they need. Many families cannot even cover health costs and pay school fees. It has become difficult for them to even get a meal a day". This is what Father Jerome Paluku, Secretary for Missionary Cooperation of the Discalced Carmelite Order, tells Agenzia Fides with regards to the situation that the majority of the population in the African country are facing.
In the parish of Nkoabang situated in Bitotol, a district south-east of the capital, Yaoundé, the Carmelites have been operating for over 20 years: "Our charism - he explains - is precisely that of announcement and also of solidarity, especially towards the weak, the poor, and the abandoned. We try to understand what their needs are and help them as much as possible". Just as a sign of closeness towards the most vulnerable, on Sunday 17 November, on the occasion of the third "World Day of the Poor", established by Pope Francis, special initiatives were organized in the parish of Nkoabang for people in need: "Our confreres periodically visit the many sick people in the neighborhood, bringing them, in addition to the Sacraments, also food, basic necessities and medicines".
"The hope of the afflicted will never perish" (Ps 9,19) is the theme proposed this year by the Pope to all Catholics and people of good will: "Our missions in support of the Cameroonian population in Nkoabang - reports father Jerome – were carried out thanks to the collaboration of the Spanish NGO Manus Unidas, and to date they are also financed with the proceeds that derive from the activity of a farm that raises hens and pigs, and from the cultivation of palm trees". "In Nkolbisson, a suburb in the north of the capital, where our seminar is located, wells have been built to bring drinking water", he adds. The missionaries also guarantee free treatment for the sick thanks to the leper colony managed by the Carmelite nuns in the town of Douala, south of the country on the Atlantic coast. "It is a sign of closeness for these people - continues the secretary - to give them a smile and the hope of a better life".
The challenges that Cameroon has to face to improve the living conditions of its population are still many: poverty is still at 37.5%, in the scale of the Human Development Index drawn up by the United Nations it is ranked 153rd out of 187 countries. Famines, climate change and an inflation rate that is still quite high (4.3%) have made the predominantly agricultural economy even more unstable. "The situation - confirms Fr. Paluku - has worsened due to malnutrition and affects mainly children and the elderly, the most physically vulnerable people and often fall ill with malaria", he underlines. But even the poor are ready for solidarity: "The Cameroonian people - he concludes - are very willing to share: the little they have in favor of those in need". (ES) (Agenzia Fides, 16/11/2019)

ASIA/INDIA - Connection and compassion: Caritas at the forefront in the fight against the coronavirus