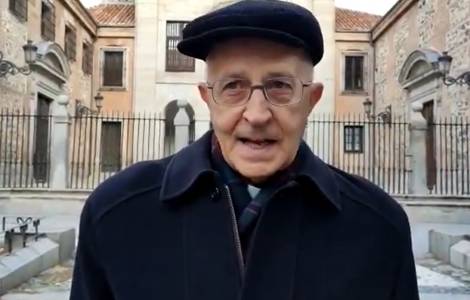 2020-02-25
"Día de Hispanoamérica": in communion with the Spanish missionaries in Latin America

2019-11-16
"The «portico» of the Church of Pope Francis": Cardinal Filoni at the San Damaso University

2019-10-17
"With you, Luigi, we suffer, we pray and we hope": the missionaries recall and wait for Father Maccalli

2019-09-04
Archbishop Dal Toso at the Compostelan Days of Theology: "this world still needs the salvation of Christ"

Madrid (Agenzia Fides) - "Since the beginning of his pontificate, Pope Francis called the whole Church, which lived a moment of immobility, to a momentum and a renewed zeal in evangelization, taking into account the ecological reality, of peoples and their cultures". This was underlined yesterday, November 15, by Cardinal Fernando Filoni, Prefect of the Congregation for the Evangelization of Peoples, who took the floor during the XII Academic Day organized by the Universidad San Damaso - Faculty of Canon Law, in collaboration with the Archdiocese of Madrid, of the Ecclesiastical Court and of the School of Legal Practice.
"The «portico» of the Church of Pope Francis. Vision and missionary dimension "was the theme of the Cardinal's report, who underlined how the Pope's intention is to "change a mentality, a certain «culture» of the Church, so that this passes from a sedentary, structured and quiet reality to a perspective of "Church that goes forth", in "mission in the world" ... In this context, every ecclesial activity, including the juridical, theological or simply pastoral activity, has a missionary relevance".
One must imagine entering a building that symbolically corresponds to the pontificate of Pope Francis, Cardinal Filoni explained: "Once through the door, we find ourselves facing a large courtyard, where men and women of our time stand and meet without distinction of language, race and multiple interests. This atrium opens three porches. On the first there is the incipit of a programmatic document of the pontificate of Pope Francis: Evangelii Gaudium, on the second that of the Canticle of the Creatures of Francis of Assisi, Laudato Sì, on the third that of the Letter on human fraternity for peace and common coexistence".
The context of the first porch essentially concerns the Church, underlined Cardinal Filoni, not the structure of the Church, but "to encounter and bring Jesus Christ to all, source of true joy". Evangelii gaudium intends to introduce the missionary transformation of the Church, "a Church that the Pope sees as a mother with an open heart, who makes her own the crises and challenges of today's world, without exclusions or selfish temptations, away from sterile and worldly controversies, which generate lacerations if not internal wars". This document, he continued, "does not end in a simple portico, but opens a path that concerns the life of the Church, her mission, her role in the world".
Since the Church of Christ is on a mission in the world, we therefore understand a second portico, on which the words Laudato Sì are engraved, "the incipit of the encyclical letter with which Pope Francis calls all Christians and those who are animated by good will, to hear the cry of the earth and the poor of the world".
The third portico concerns inter-religious dialogue, and the guide is constituted by the document "On human fraternity for world peace and living together" signed on 4 February 2019 by the Pontiff and the Great Imam of Al-Azhar, Ahmad al-Tayyeb, at the end of the World Conference on Human Fraternity. "What the Pope particularly cares about - Cardinal Filoni said - are the relationships between religions due to too many conflicts, as well as too many intolerances and proselytism as a form of hoarding of consciences! The document, wanted by the head of the Catholic Church and by the Great Imam of Al-Azhar, has a significant historical, moral, cultural and social value, all the more because it took place in the presence of representatives of all the major religious confessions participating in the aforementioned Conference, in which they appealed to dialogue, understanding, acceptance of others and peaceful coexistence among human beings". (S.L.) (Agenzia Fides, 16/11/2019)

ASIA/PAKISTAN - Dialogue and fraternity: the legacy of the Abu Dhabi Declaration in Pakistan