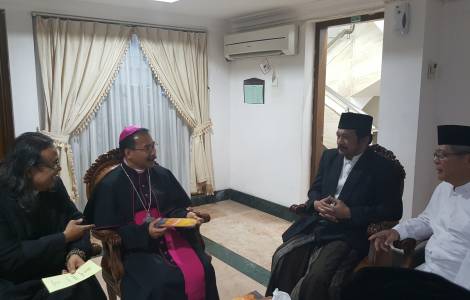 2022-05-17
Camillians of the island of Flores, in view of new ordinations, express joy for the newly elected Superiors

2022-05-02
End of Ramadan: Christians stand in solidarity with Muslims

Jakarta (Agenzia Fides) - "It was Pope Francis who urged us Indonesian Bishops to deepen the Document on human fraternity, spread in Abu Dhabi, and to put it into practice, looking at Indonesia as a modern country, where religious minorities can live peacefully with the majority of Muslims, in a social climate of respect, tolerance, fraternity": this is what Cardinal Ignatius Suharyo, Archbishop of Jakarta and President of the Indonesian Bishops' Conference, says to Agenzia Fides at the conclusion of the annual assembly of Bishops of the archipelago, held in Bandung from 4 to 14 November.
The Cardinal, noting that "our Indonesian Muslim friends have seriously studied that document", explained the final message of the assembly, recalling the challenge of religious extremism, and, in this context, the challenge of interreligious dialogue and of coexistence, in the most inhabited Muslim country in the world, where over 80 million moderate Muslims adhere to the "Nahdlatul Ulama" organization and another 60 million to "Muhammadiyah".
The Cardinal reiterates that "the Indonesian Catholic Church is being tested and called to promote fraternal brotherhood and peace, as advocated by the Abu Dhabi Declaration. This fraternal spirit must be based on the values of humanity that must be internalized on a personal and social level, and then translated into society and human relations".
The Cardinal, at the end of an assembly of the episcopate in which the text of the Abu Dhabi Declaration was deepened, notes that "each diocese should promote the content and the message of the Abu Dhabi Declaration, in every way, including the one that passes through social media", hoping that "priests and religious have the courage to 'go forth', and come into contact with communities of other religious confessions", to help build human brotherhood in the nation, in Asia, in the world. (MH) (Agenzia Fides, 14/11/2019)