ASIA/INDONESIA - The Bishops: "The Church in Indonesia, the engine of unity and interreligious brotherhood" 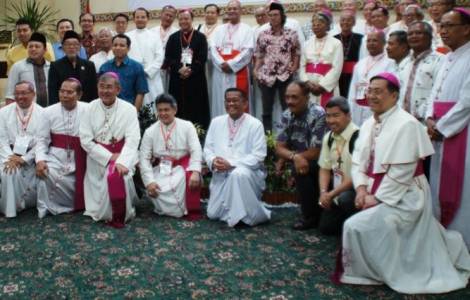 2019-11-13
The Bishops: "The Church in Indonesia, the engine of unity and interreligious brotherhood"

Bandung (Agenzia Fides) - "The Church must open up, leave the comfort zone and be present in the midst of society to strengthen interreligious brotherhood. The Church must spread peace and benevolence, respect human rights, cultivate dialogue, promote equality and justice, improve public health, raise awareness of scientific developments and maintain harmonious coexistence in diversity": is what the Indonesian Bishops say in the message released at the end of the annual meeting of the Indonesian Bishops' Conference (KBI), held in Bandung, which ends tomorrow, November 14, 2019. The message, signed by the President and the General Secretary of the Bishops' Conference, Cardinal Ignatius Suharyo of Jakarta and Bishop Antonius Subianto Bunjamin OSC of Bandung, is the result of the intense study days lived by the Indonesian Bishops who discussed the theme "Human fraternity for a peaceful Indonesia".
The Bishops had the opportunity to study and deepen the Abu Dhabi document entitled "Human fraternity for world peace and living together", signed jointly by Pope Francis and the Great Imam Ahmed el-Tayeb in Abu Dhabi in February. Some Muslim and Catholic scholars contributed to the analysis, which the Bishops listened to with interest.
The Message, sent to Agenzia Fides, states that "the study days helped the Bishops to better understand the contents of the Abu Dhabi Document", "in the awareness of the existence of extremist movements in Indonesia", in order to "find opportunities to strengthen brotherhood among human beings".
The Indonesian Bishops "thank God for the Indonesian nation based on the Pancasila and the 1945 Constitution imbued with the spirit of 'Bhinneka Tungus Ika' (unity in diversity), within the framework of the unitary State of the Republic of Indonesia, which are all the main pillars to build a harmonious common order of life amidst the diversity of religions, tribes and groups". In this framework the Bishops affirm that "the Indonesian Catholic Church is called to participate in the promotion, struggle and realization of fraternity as shared prosperity". "Diversity is a necessity and a divine gift that must be cultivated and developed with an attitude of mutual acceptance, respect and mutual cooperation", they continue.
The text sent to Fides states that "human fraternity must bring goodness in human life in its dimensions and be a witness and greatness of faith in God who unites divided hearts and becomes a sign of closeness between those who believe that God created human beings to understand each other, work together and live like brothers".
"Coexistence as the basis for realizing human fraternity does not only mean finding common points but it is the willingness to accept and appreciate the differences in beliefs and religious teachings", notes the text, stating that the current challenge of the Indonesian nation is to "contain extremism that often generates acts of terrorism".
The Bishops consider the Abu Dhabi Document "very important to be spread among Catholics and in society, especially among the younger generations in various ways, also using social media". Thus, "new meeting spaces will be born in the community to rethink, redesign, build new hopes and finally act with novelty in religious life". It is important "to live an inclusive religious life without losing one's identity", they underline, so that "men take care of each other and they are passionate about building human fraternity based on respect for human dignity".
The message, then, recommends the government to "adopt wise policies based only on the values of Pancasila, such as humanity, unity, wisdom and justice to reduce social inequalities, prevent conflicts among the children, put an end to forms of prolonged violence, block the rate of environmental damage, give equal opportunities for access to resources and create a more dignified system of coexistence".
Finally, religious leaders, intellectuals, artists, media experts, economists and all the people in their respective sectors of life are asked "to find ways to revive human values for the realization of public welfare, through human fraternity". "We will only be able to live peacefully in this country if all the parties, without exception, always strive to join hands and work together for the common good", the Bishops write in conclusion, (PP) (Agenzia Fides, 13/11/2019 )

AMERICA/COLOMBIA - Year of fraternity in the Archdiocese of Popayan: personal, social and ecological conversion

ASIA/UZBEKISTAN - Prayer and fraternity: the faithful of Samarcanda celebrate St. John the Baptist