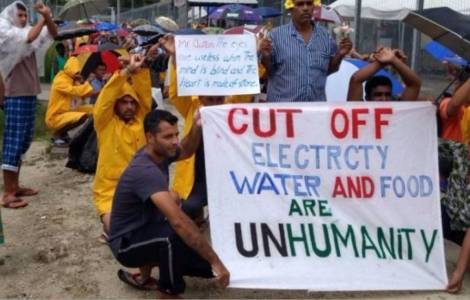 2020-01-24
Bishops and Caritas against human trafficking: a social alarm

2020-01-20
Jubilee of the beatification of Peter ToRot, an example for everyone

Port Moresby (Agenzia Fides) - "I’ve heard of the precarious conditions of refugees and asylum seekers in Papua New Guinea. However, after meeting some of them, I realized that the situation in which they live is inhuman and dehumanizing: their history of suffering touched me a lot. Meeting the asylum seekers also gave me the opportunity to express our solidarity and the support, prayers and goodwill of the Australian people, which has a great tradition in the care of migrants and refugees. I am grateful for this meeting, but I am worried about their condition". This is what Mgr. Vincent Van Long, OFM, Bishop of the Diocese of Paramatta, Australia, and responsible for the Commission for migrants and refugees in the Australian Bishops' Conference said in a note sent to Agenzia Fides, after their visit to Papua Nuova Guinea and the meeting with some refugees and asylum seekers from Nauru and Manus Island.
The two islands, situated in the middle of the Pacific Ocean, are home to refugee camps where migrants and asylum seekers heading for Australia are transferred and detained in inhuman conditions after being rejected: the refugees on the island have been living in that limbo now for years and some of them, in a state of physical and psychological despair and prostration, have committed suicide to put an end to their suffering.
Mgr. Van Long commented the meeting, which took place in recent days and in Port Moresby, between a delegation of seven members of the Australian Church and some of the refugees who have been stranded in Papua New Guinea for years. During the visit, the Bishop had the opportunity to visit the houses offered by the Papuan government to migrants: the initiative was launched last August with the intention of transferring asylum seekers from the Isle of Manus to the Papuan capital, offering them decent accommodation, with a home and health care. "This solution, which also represents a step forward, does not seem to appease the desperation of the detained refugees", the Bishop said after visiting the homes for migrants. "I urge the local Catholic Church to continue its humanitarian assistance efforts and assure the full support of the Australian Catholic Bishops' Conference and its communities", concluded Mgr. Long.
Since 2013, the Australian government has adopted the "No Way" policy, based on total closure against migrants: the coasts are guarded by a massive deployment of naval units and those arriving by ship will not have the right to legally establish themselves in the Country. Some migrants are brought back to their country of origin, while others are resettled on the island of Manus, territory of Papua New Guinea, or on the island of Nauru, where refugee camps are organized and where asylum seekers remain for a long period. (LF) (Agenzia Fides, 12/11/2019)