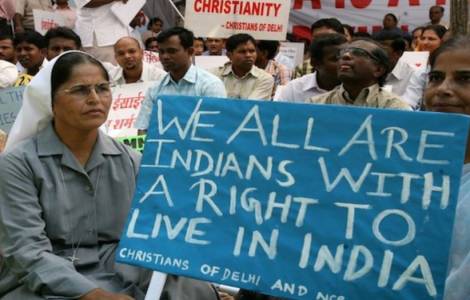 2020-01-08
Christian leaders in the ruling party: the new citizenship law is not inclusive and needs to be expanded

2019-12-18
Missionary Church's commitment to those affected by leprosy

2019-12-17
The new law on citizenship to immigrants "is unconstitutional": appeal to "civil disobedience"

New Delhi (Agenzia Fides) - "Atrocities against Christians are on the rise. In 2014, about 150 episodes of violence against the community were reported. In 2016, the count rose to 200 and in 2017 it went up to 270 accidents. In 2018, there were 292 episodes of violence against Christians. In 2019 (until September) 247 cases were reported, 60 of which in the state of Uttar Pradesh. In the past year, 40 churches have been closed due to violence. In Chhattisgarh, communities and other Christian groups even face a social boycott. We ask the government to end the harassment towards pastors, priests and violence against the Christian community". This is what Christian leader Minakshi Singh, one of the Christian leaders who in recent days called a public demonstration in Delhi, says to Agenzia Fides. Among the points raised by the Christian community, is to put an end to the attacks and violence on priests, religious, nuns and lay people, often unjustly accused of "fraudulent conversions".
Indian Christians are asking the federal government to protect the well-being of religious minorities, especially Christians, in all areas of life. Christian communities regret that the government of Prime Minister Narendra Modi has not given representation to religious minorities, not including any Christian minister in the government. "We hope that Modi will soon be able to appoint a Christian minister in his cabinet who has the confidence of the community and is able to safeguard the interests and rights of Christians in the times to come", says Minakshi Singh.
"Religious minorities, like Christians and Muslims, are targeted by nationalist Hindu groups. For this reason urgent measures are needed against the groups responsible for this violence", said to Fides A. C. Michael, Indian leader of the" Alliance for the Defense of Freedom (ADF), a global organization that defends the rights of Christians. According to Michel, who is also the coordinator of the United Christian Forum, Christian leaders have also drawn government attention to the laws called the "Freedom of Religion Act", in force in seven Indian states, habitually used incorrectly as a pretext to hit the Christian community. "These laws should be immediately withdrawn to ensure total religious freedom", notes Michael, a Catholic lay person.
Christian leaders have expressed concern about the rise in violence against the faithful, confirmed by the National Crime Records Bureau (NCRB). Protestant Bishop Emeritus Karam Masih of Delhi said: "Our rights should be protected. We are peace loving people. The government should do everything to keep peace. The government should support constitutional values". (SD) (Agenzia Fides, 12/11/2019)

AMERICA/BRAZIL - Bishops: the right to freedom of expression does not cancel respect for people and their values