AFRICA/TANZANIA - Archbishop Dal Toso at the closing of the Extraordinary Missionary Month: Africa is a big hope for the Church 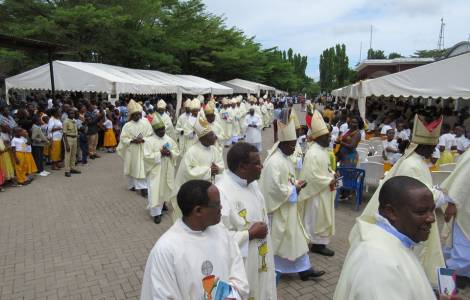 2020-09-18
Bishops to the government: "a social market economy" to eradicate poverty

2020-06-15
Prevention from contagion: the Bishops activate catechism for children via radio

Dar es Salaam (Agenzia Fides) - With the hope that the missionary seeds planted during the Extraordinary Missionary Month continue to germinate and bear fruits in missionary apostolate, Archbishop Giampietro Dal Toso, President of the Pontifical Mission Societies (PMS), during the concluding celebration of the Extraordinary Missionary Month in Tanzania (see Fides, 31/10/2019), stressed that "Africa is a big hope for the universal Church". During the solemn Eucharistic celebration held on Sunday 10 November at the Msimbazi Center in Dar es Salaam, with the participation of Bishops, religious and laity, as well as civil authorities, the Archbishop highlighted the growth of the African Church in quantity and quality, and above all its missionary growth, since it sends missionaries to the different countries not only in Africa but also all over the world. Mgr. Dal Toso called to look to the future, the year 2022, when the 4th centenary of the foundation of the Congregation for the Evangelization of Peoples, the bicentenary of the creation of the Missionary Society for the Propagation of the Faith, and the centenary of the Societies’ elevation to the “Pontifical” status will be celebrated". The President of the PMS thanked for what the Catholic Church of Tanzania has been doing and is still doing to promote the Pontifical Mission Societies and the entire work of spreading the Gospel, inviting them to continue to cultivate the missionary spirit, especially among the young generation".
Quoting St. John Paul II and Pope Francis on the urgency of revitalizing and intensifying missionary work, still far from being completed, making every baptized person aware of his missionary responsibility, Archbishop Dal Toso recalled that "to raise missionary awareness is the great vocation of our Pontifical Mission Societies". Created in Europe, in order to promote evangelization in mission territories, including Tanzania, the PMS have supported the creation and growth of the young Churches. "Our task now - reiterated Mgr. Dal Toso - is to continue with the Mission of these Societies, because still now we need to spread in the Church a missionary spirit", and he urged to work even more to make them known, to promote them and to internalize them in the pastoral plans of the dioceses and even in the life of the Small Christian Communities.
In the concluding part of his speech, the Archbishop focused on the theme of the family, "without which it would be impossible to build a healthy society", and urged "to evangelize the family, so that families may in turn become evangelizer". In this regard he cited the experience of missionary families, initiated by the PMS of Paraguay 10 years ago, when some families began to visit other families bringing them the good news of the Gospel. Today there are more than 5000 missionary families that have now started their mission also in other Latin American countries. From this example, the President of the PMS proposed that in Catholic families the Gospel of the day be read together every day, as a form of prayer in common, since "gathering together in the name of Christ allows us to come to know him more intimately and to create relationships of true communion between us". (SL) (Agenzia Fides, 11/11/2019)