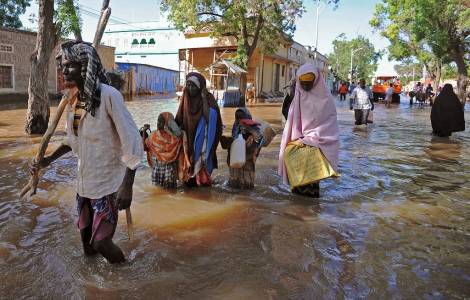 2019-11-30
World AIDS Day: The DREAM program of the Community of Sant’Egidio for 11 African countries

2019-11-11
Undermining mission means undermining the very nature of the Church: No to "invisible Shepherds"

Nairobi (Agenzia Fides) - The violent floods that hit several areas of East Africa have caused death and destruction in South Sudan, Kenya and Somalia. In Kenya, at least 29 people died in the floods that hit 25 counties in the Country. Among those most affected are the counties of Mandera, Marsabit, Turkana, Wajir, Iamu and Kwale. Caritas Kenya has launched an appeal for the collection of funds, food and first aid to help those affected.
In South Sudan, His Exc. Mgr. Stephen Nyodho Ador Majwok, Bishop of Malakal, the largest diocese in the country, said that 238,000 km2 of the territory of the diocese is flooded. The Bishop has asked the government to declare a state of national disaster to deal with the emergency.
According to a UN report, "unusual strong seasonal rains have devastated vast areas of South Sudan since July, affecting approximately 908,000 sq. Km. Rains should continue at least until the end of November putting additional people at risk". According to the report, the drama is accentuated by the fact that "in the 32 counties flooded in the States of Jonglei, Upper Nile, Warrap, Eastern Equatoria, Northern Bahr el Ghazal, Unity and Lakes, more than 3 million people were already in need of assistance before the beginning of the rains". In fact, South Sudan is struggling to get out of the disastrous civil war that broke out in December 2013, which caused a high number of refugees and internally displaced persons.
In Somalia, according to another report, at least 182,000 people have been displaced by floods, which have devastated fields, infrastructure and roads. In the state of Hirshabelle, the Shabelle River overflowed in the city of Belet Weyne and surrounding areas on 26 October. Three people, including two children under the age of 10, drowned. Yesterday, October 28, a boat with 20 people turned upside down near Belet Weyne, causing at least a dozen victims. (L.M.) (Agenzia Fides, 29/10/2019)

OCEANIA/AUSTRALIA - Solidarity and community: coordination of Catholic bodies to help victims of fires

ASIA/PHILIPPINES - Prayer intensifies while a "volcanic tsunami" is at risk

AMERICA/ARGENTINA - "Stop stealing in the north": Salta area plundered of wealth and the inhabitants abandoned in misery