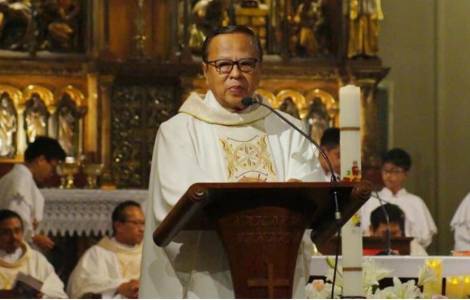 2019-11-13
The Bishops: "The Church in Indonesia, the engine of unity and interreligious brotherhood"

Jakarta (Agenzia Fides) - "The Pope appreciates the values of the Pancasila (the Charter of the five principles, ed) at the base of the Indonesian nation, which strives to contribute to building peace in the world, developing true brotherhood": this is what Indonesian Cardinal Ignazio Suharyo, created Cardinal by Pope Francis in the Consistory of 5 October. As Agenzia Fides learns, during the celebration of a holy thanksgiving mass in the Cathedral in recent days, the Cardinal said: "I am sure that my appointment is a recognition to the Catholic Church in Indonesia, which continues to try to grow in the spirit of the Second Vatican Council". Mgr. Suharyo stressed that "the Holy See very much appreciates the harmony promoted by the Indonesian people, especially in their relationship with the Muslim faithful".
Catholics in Indonesia, the Cardinal added, who is also President of the Indonesian Bishops' Conference, "have played an active role in the struggle for Indonesian independence, and today they are committed to the social life of the nation".
Mgr. Suharyo linked the appointment of the new Cardinals to the Extraordinary Missionary Month, announced by the Pope for October 2019, stating that "for this reason the call is very clear, it is the Pope's invitation to continually renew his evangelizing mission in the whole world".
In this process of "renewal" and "conversion", which never ends, the Archbishop of Jakarta continued, "the Indonesian Catholic Church is called to be a Church that, in fidelity to Christ, is increasingly relevant for its own community and ever more significant for society".
This "renewal", he noted, starts from the life of prayer, and quoted the Gospel of Luke (Lk 18, 1-8), where Jesus invites "to pray always without becoming weary".
Nourishing the relationship with God, concluded Cardinal Suharyo, man receives "apostolic courage, evangelical humility and diligent prayer", key factors for the renewal of the Church. (PP) (Agenzia Fides, 29/10/2019)

ASIA/CHINA - Catholics remember a young Chinese priest and missionary of Tibetan ethnicity, who devoted his life for the Gospel

ASIA/SRI LANKA - Vote with conscience and attention to the common good: the Church indicates the criteria for the presidential elections