AFRICA/ZIMBABWE - A lay missionary, an apostle of lepers, towards beatification 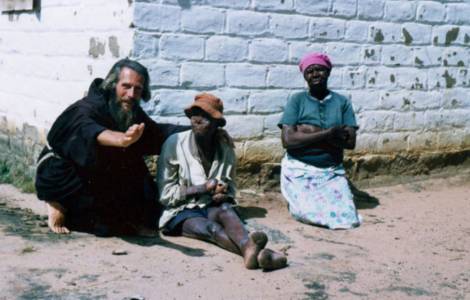 2019-10-23
A lay missionary, an apostle of lepers, towards beatification

2019-09-20
Appointment of the National Director of the PMS, Fr. Simplisio Manyika, O.Carm.

2019-09-17
Bishops denounce violence and beatings against the opposition

Harare (Agenzia Fides) - The cause for the beatification of British-born John Bradburne, a Franciscan secular missionary, has started in Zimbabwe. His life and his testimony of faith in the midst of the lepers will be examined first at a diocesan level and then at the Congregation for the Cause of Saints in Rome. If his virtues are recognized, he could become Zimbabwe’s first saint.
In September, the news of the Cause for beatification created great attention. Father Brian MacGarry, a Jesuit, who knew Bradburne at the time of the Rhodesia war of independence, notes to Fides: "I knew him well", observes Father Brian. "I can say with certainty: he was a Catholic of profound spirituality and the work he did together with the lepers was of great medical and human value".
The son of an English vicar, Bradburne converted to Catholicism after serving in the British army in Malaysia and Burma, where he was also wounded in combat. "His religious faith - recalled Father MacGarry - was very profound. He tried to become a Carthusian, then a Benedictine and, finally, a member of the Congregation of Our Lady of Sion. None of the three orders, while acknowledging his profound spirituality, welcomed him. He then became Tertiary Franciscan. He always remained a layman, but from the moment he entered the Third Order he always wore a habit".
In 1971 he arrived in Rhodesia to look for "a cave in which to pray". In 1964 he joined a leper colony in Mutemwa. That will become his community. The Jesuit remembers: "The colony was dirty and the people were dirty, recalls who knew him then. There was no medicine, no clothes and people were hungry. He took care of everyone's needs: he fed people, cleaned and bandaged their wounds". Every day for a decade, the routine is the same. He got up at 3 am to bathe leprous patients. He helps them to eat and accompanies them to prayer. His only leisure is a five-kilometer jogging.
In 1979, controversies began with the inhabitants of the nearby village. The lepers accuse them of leaving the animals to graze on their fields, destroying the crops. Bradburne offers to mediate. "He was then brought by the villagers to the local commander Zanla (Zimbabwe African National Liberation Army, the military wing of Zanu, a movement that fought the segregationist regime)", recalls Father MacGarry. "The villagers accused him of being a spy, because he had defended the lepers. The commander was convinced that John was innocent, but he had enemies in the village. The commander himself could not offer him protection if he remained there, so he offered to send him to Mozambique for security reasons. John refused, saying that his place was with the lepers. Zanla could not assign him men to protect him, so the villagers took him and killed him along the way".
Father Brian does not agree with those who intend to make Bradburne an icon to be venerated and prefers to give a more concrete image of him. "John was a good man, attentive towards others, according to the evangelical spirit of Francis of Assisi. He lived with the lepers who were then the last of the last". (EC) (Agenzia Fides, 23/10/2019)

ASIA/PAKISTAN - Paul Bhatti: hope and commitment for Shahbaz Bhatti to be declared a "martyr"