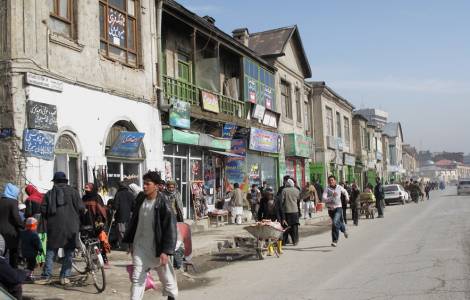 Kabul (Agenzia Fides) - "Whether it is Ghani or Abdullah, the next president will have to struggle a lot before gaining the trust of Afghans, who ask for security, peace, work: things they have not had so far. The next president will also have to face the other big issue that has remained pending: the peace process with the Taliban.
Whatever happens, from the final election result of Afghanistan - which on paper should be revealed on November 7th, but will probably be postponed – nothing much is to be expected. According to available data, about 2 million Afghans voted regularly, one fifth of those registered on the electoral lists, one fifteenth of the total population. The deficit of legitimacy of the government and the institutions cannot be filled by such a partial and circumscribed vote". This is what Giuliano Battiston, analyst and author of several researches on Afghan civil society, tells Agenzia Fides with regards to the Afghan presidential elections held on September 28th.
The situation in the Asian country is still very uncertain: "After more than two weeks, the independent electoral commission has not yet clarified how many total votes, which should be considered valid and which are not, such as the voting percentages in each of the 34 Afghan provinces", notes Battiston. And he adds: "There are many controversies: on the reliability of the system adopted, on the inclusion or not in the final count of the votes that have not been validated through biometric identification tools, on the same transparency of the Electoral Commission, which undergoes political pressure from all parties involved, within a political climate of profound uncertainty and concern".
Meanwhile, the two main candidates, incumbent president, Ashraf Ghani, and "prime minister" Abdullah Abdullah, have both declared that they have won. From here, explains the researcher, the concern that the same situation as 2014 could repeat itself: "At the time, Ghani and Abdullah, accused each other of fraud, tension rose and the then US Secretary of State, John Kerry intervened, imposing a national unity government.
This time, however, the United States does not seem willing to play the role of mediator, and a further political compromise that does not respect the popular will (although there are few voters) would be poorly digested by the population, already critical of the excessive interference of the external actors in Afghan politics", concludes Battiston.
Meanwhile, in Afghanistan, the war continues. Among the recent attacks, on Wednesday, October 16, in the Alishang district an explosive-laden truck, located near a police headquarters, caused the death of at least three security officers and injured dozens of people, mostly children.
"We firmly believe that Jesus Christ is the Lord and King of the universe, He wants to reign over all nations. And his kingdom is "a kingdom of truth and life, a kingdom of holiness and grace, a kingdom of justice, love and peace". We pray the for our salvation in Afganistan", was the appeal launched a few weeks ago by the Barnabite priest, responsible for the Missio sui iuris in Afghanistan, Father Giovanni Scalese. (LF) (Agenzia Fides, 17/10/2019)

ASIA/THAILAND - The protest of the "yellow ducks": democracy and fewer privileges to the Crown

NEWS ANALYSIS - Cardinal Ambongo: in Congo amidst the crisis and risks of balkanization, the Church alongside the people