EUROPE/SPAIN - "With you, Luigi, we suffer, we pray and we hope": the missionaries recall and wait for Father Maccalli 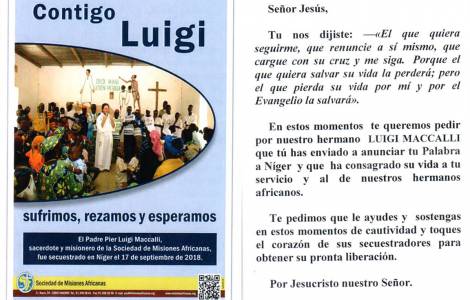 2020-02-25
"Día de Hispanoamérica": in communion with the Spanish missionaries in Latin America

2019-11-16
"The «portico» of the Church of Pope Francis": Cardinal Filoni at the San Damaso University

Madrid (Agenzia Fides) - "It has been more than a year since we received the news of the abduction of Father Pier Luigi Maccalli, our friend and confrere. I still remember having received a call at the end of the celebration of mass in the parish of Bugu, in Benin, and that everyone, including the faithful who had accompanied me, were left speechless". Thus began the note that Father Marcos Delgado Arce, a priest of the Society for African Missions (SMA), the new Provincial in Spain, sent Fides on the occasion of the umpteenth anniversary - 13 months - since the kidnapping of father Pier Luigi Maccalli, which occurred in Niger on 17 September 2018 (see Fides, 18/9/2018). "Everyone wonders why this gesture, what could have happened and why God allowed it", reflects the religious.
A few months later two other SMA confreres were forced to leave the mission in Torodi, Tillaberi region, south-east of Niger, 60km from Niamey, another 60km from the border with Burkina Faso, due to the risk they ran. "Thank God, they are returning to Niger, but to Gaya, on the border with Benin", added Fr. Marcos who was on a mission in Benin until July 2019.
"Last September 17th, one year after the kidnapping of Fr. Pier Luigi, we met in Madrid without the answers to those questions. The SMA province of Spain, with all the other confreres, has united in a great Eucharist, together with collaborators, friends and common people, to remember and pray for our dear friend".
"A banner with the words "With you, Luigi, we suffer, we pray and we hope" sums up what we are experiencing. We unite in prayer which is the only thing we can do from here and, with him, we await his rapid release".
"In this period - concludes Fr. Delgado - we have released several interviews to talk about Fr. Maccalli and the reality of Niger and to invite everyone to join the chain of prayer we have launched. We hope that public opinion and political institutions can help us. Many people continue to pray every day and ask for his release. A photo of Pier Luigi is above the altar of our chapel, and helps us to stay close to him and to all the friends who work in this part of Africa". (MDA/AP) (Agenzia Fides, 17/10/2019)