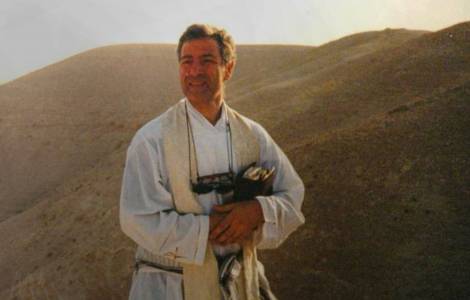 2020-11-12
Scalabrinians: the Covid emergency does not stop the tragedies in the Mediterranean

2020-11-10
Meeting between the Pope and the recently released Italian missionary in Mali, Father Pierluigi Maccalli, SMA

2020-10-26
Scalabrinian Missionaries: 125 years at the service of migrants, a very current charism

2020-10-15
In the wake of the Extraordinary Missionary Month: "Baptized and Sent" to become "Weavers of Fraternity"

Rome (Agenzia Fides) - "If we have discovered we are children of the Heavenly Father, how can we be silent about the joy of being loved, the certainty of always being precious in the eyes of God? This is the announcement that so many people await. And it is our responsibility". The Cardinal Vicar of Rome, Angelo De Donatis, recalled this in a letter sent to the Fidei donum priests of the diocese of Rome, on the occasion of the Extraordinary Missionary Month.
"In this month of October, our Bishop, Pope Francis, has invited us to live an extraordinary missionary Month in order to resume the missionary transformation of life and pastoral care with new enthusiasm", writes the Cardinal, who sends his greetings to the Roman missionaries and families "who live the mission at the service of the Kingdom of God". "The Lord asks us again to commit ourselves where we are, as we are, with those around us, reminding us that the protagonist of the mission is the Spirit Holy. The Lord will not leave us alone; by witnessing we discover that the Holy Spirit arrived before us to prepare the way".
The initiatives promoted by the Diocese of Rome for the Extraordinary Missionary Month include the Award named after Don Andrea Santoro, fidei donum priest killed in Trabzon, Turkey, on 5 February 2006 (see Fides, 6/2/2006; 8/2/2006). On October 26th, at the Conciliation Hall of the Lateran Palace the award will be given to: Sr. Anna Bacchion and Sister Marzia Feurra, Missionaries of the Consolata in Djibuti, involved in the health field, in the school, at the service of the disabled and in the promotion of women; Father Sebastiano D’Ambra, PIME missionary in Mindanao (Philippines), who started the Silsilah Islamic-Christian dialogue movement, from which the Emmaus Community, of consecrated laymen, and the Harmony Village originated; the Intercongregational Missionary Community (CIM) present in Haiti since 2010, to respond to the suffering of the population after the earthquake; spouses Luigi and Isabella Bencetti, who from 2001 to 2007 served in Carabayllo, Peru, serving about 40 thousand people who lived in the most absolute precariousness, also lacking essential services. (SL) (Agenzia Fides, 11/10/2019)

ASIA/KYRGYZSTAN - Pastoral Letter for the new year: "Christ is faithful to his Church and offers great opportunities for grace, in the challenge of the pandemic"

AMERICA/BOLIVIA - The funeral of Mgr. Scarpellini: in life he gave everything for the announcement of the Gospel