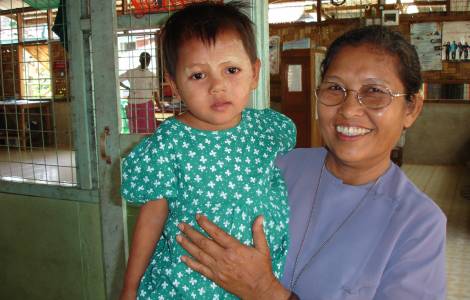 2020-01-17
The Bishop of Myitkyina: "Stop violence, which slows down development"

2019-06-11
The Bishops of Myanmar: it is urgent to stop the dam on the River Irrawaddy, a harbinger of a catastrophe

Yangon (Agenzia Fides) - Religious leaders must raise their voices against the atrocities committed against innocent civilians in Myanmar: this is the appeal launched by Cardinal Charles Bo, Archbishop of Yangon, who remarked: "I am pained by the silence of religious leaders of this great spiritual citadel. In the country there are 500,000 Buddhist monks, 70,000 Buddhist nuns almost 1,200 Christian pastors, over 2,000 Catholic nuns, countless other religious leaders. Some silence can be criminal. The war pursued is unjust and unholy. Our prayers and rituals are nullified by the blood and tears of innocent people. Myanmar people are peace-loving and follow the guidelines of their religious leaders". In a statement addressed to religious leaders and sent to Agenzia Fides, the Cardinal wrote: "Not a single day passes without the heart wrenching news of innocent civilians being displaced or killed or maimed by the ongoing conflict in Lashio, other Northern regions and Rakhine State", recalling the different regions of Myanmar still theater of conflict.
If the current Rohingya crisis in Rakhine state has attracted international media attention, other minority communities such as Karen, Shan, Mon, Chin continue to suffer discrimination and violence. The Rohingya are Muslims and many other ethnic minorities such as the Karens profess Christianity, while the majority of the Burmese people are of the Bamar ethnic group and of Buddhist religion. These factors of majority and minority, at a cultural and religious level, interwine, in ongoing conflicts, with political implications.
"Most of these people are extremely poor and innocent people. Striving for basic needs is their daily unending struggle. No group had done any economic development for these people", the Cardinal complained.
"A ferocious conflict rages in around them, forcing them to flee. With pain and sorrow, I have been witness to their tears, their blood and their brokenness. Military forces are not concerned with the people’s safety nor have these groups shied away from heavy weapons, like arial bombs", he added
Appealing for peace, the Cardinal added, addressing military leaders and guerrilla groups: "I ask all armies (state and non-state) -: are these innocent, poor your enemies? Aren't they your brothers and sisters? How many people died due to a chronic war? How many women and children languish in abandoned fields? Don't you see their anguish and tears? Where is the mercy?"
In his concluding words, the Cardinal recalls: "There is a huge potential for peace through religious leaders. Kindly raise your voice against this mutilating war. The suffering of the innocent will not leave us. Kindly speak out. Peace is possible, Peace is the only way". (SD) (Agenzia Fides, 11/10/2019)

ASIA/SRI LANKA - Vote with conscience and attention to the common good: the Church indicates the criteria for the presidential elections

EUROPE/ITALY - Migrants: the Scalabrinians also support the appeal of Poor Clares and Carmelites

ASIA/BANGLADESH - Rohingyas have been in Bangladesh for two years: repatriation is difficult

ASIA/BANGLADESH - Asian Christian leaders to the government: "It is urgent to face the Rohingya crisis"