VATICAN - Prayer, soul of the mission: the Rosary for the extraordinary missionary Month 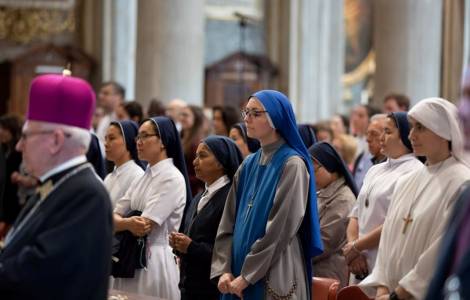 Rome (Agenzia Fides) - "Pray for the work of the missionaries and for the proclamation of the Gospel; today, in particular, let us pray for the synod on the Amazon. Let us not forget, moreover, persecuted Christians who lost their freedom": these are the words pronounced by Cardinal Fernando Filoni who yesterday, October 7, presided over the celebration of the Rosary in the Basilica of Santa Maria Maggiore, on the occasion of the Extraordinary Missionary Month, announced by Pope Francis for October 2019. The Congregation for the Evangelization of Peoples and the Pontifical Mission Societies invited "Radio Maria" to organize the event, which had a world-wide relevance, since it was broadcast live on radio and video by the almost 80 "Radio Maria" broadcasters spread across the five continents.
"It was a truly missionary prayer, in which the universality of the Church was felt", said Sister Roberta Tremarelli, General Secretary of the Pontifical Society of Missionary Childhood, one of the four Pontifical Mission Societies, present at the event. "Prayer - says Sister Tremarelli - was very intense. Every decade of 'Ave Maria' of the Rosary was dedicated to one of the five continents and recited by a representative of the continent, in a specific language: Latin for Europe, French for Africa, Spanish for America, Chinese for Asia, English for Oceania, and the meditations linked to the Marian prayer, the challenges and the great current affairs that we experience in every continent were recalled: from human trafficking to the suffering of Christians, from poverty to secularization, to respect for human dignity. We entrusted the sufferings of humanity to Mary, the heavenly Mother, renewing the certainty of the supreme missionary value of prayer. Prayer is and remains the soul of the mission, as Saint Therese of the Child Jesus taught us".
"Baptized and sent: the Church of Christ on mission in the world" is the theme of the Extraordinary Missionary Month announced by the Pope to commemorate the centenary of Benedict XV's Apostolic Letter "Maximum illud". After the celebration of vespers presided over by the Pope on 1 October, and the Rosary of 7 October, on Sunday 20 October the annual World Mission Day is scheduled with the Mass presided over by the Pope at 10.30 in St. Peter's Square. The Extraordinary Missionary Month, as widely documented by Agenzia Fides, is celebrated in the local Churches, at a national or diocesan level. (Agenzia Fides, 8/10/2019)

AMERICA/BRAZIL - Servants of the Poor: Looking at the poor in terms of their dignity

ASIA/BANGLADESH - The new Archbishop of Dhaka: priority to be given to the family, the “powerhouse” of the Gospel

EUROPE/POLAND - Campaign for the adoption of seminaries in mission territories: the seminarian of today, is the priest of tomorrow