EUROPE/IRELAND - Extraordinary Missionary Month: "It is time to revive our missionary genes, to renew our hearts for mission" 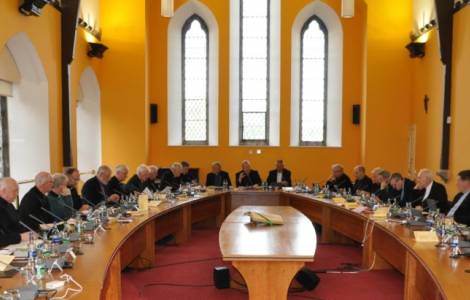 2019-10-05
Extraordinary Missionary Month: "It is time to revive our missionary genes, to renew our hearts for mission"

2019-09-03
The Extraordinary Missionary Month is also part of a social media campaign: #MyMission and #OurMission

2018-02-09
Appointment of the National Director of the PMS, Fr. Martin Anthony Kelly CSSp

2017-08-30
Confirmation of the National Director of the PMS, Fr. Maurice Hogan SSC

Maynooth (Agenzia Fides) - "It is time to revive our missionary genes, to renew our hearts for mission" said the Archbishop of Armagh, Eamon Martin, President of the Irish Bishops’ Conference, during the Eucharistic concelebration which he presided over on 1st October, opening the Autumn General Assembly of the Bishops of Ireland, in the oratory of Santa Maria in St. Patrick’s college, in Maynooth.
With this celebration, broadcast in streaming, the Archbishop officially opened the Extraordinary Missionary Month in Ireland, inviting us to reflect on the "powerful words of Pope Francis" in Evangelii Gaudium "especially here in Ireland, where more and more we are speaking of ‘mission’ in the Church, rather than ‘maintenance’." The Pope writes: "I dream of a “missionary option”, that is, a missionary impulse capable of transforming everything, so that the Church’s customs, ways of doing things, times and schedules, language and structures can be suitably channeled for the evangelization of today’s world rather than for her self-preservation" (EG 27).
"In many ways - continued Mgr. Martin in the homily, sent to Fides by the Bishops' Conference - the missionary option should come as second nature to us here in Ireland, with our proud tradition of missionary outreach. But to be truly in ‘mission mode’ within Ireland will mean opening ourselves up in the Church to a new way of being, a new way of thinking, a new way of praying, a new way of communicating our teaching".
The President of the Irish Episcopate therefore recalled the reasons why Pope Francis announced the Extraordinary Missionary Month, "to rekindle in every baptised person that sense that we are all called to mission, to witness, to teach, to win others for Christ", and the words of St. John Paul II pronounced during his visit to Ireland in 1979: "The task of renewal in Christ has never ended. Each generation, with its mentality and characteristics, is like a new continent to be won for Christ".
The challenge to Europe to "find new life and joy in Christ" is welcomed by the Church of Ireland: "to rekindle the joy of the Gospel in our country; to find again the youth and courage that inspired St Columbanus and the great Irish missionaries of ancient times; to rediscover the adventure and excitement of the founders of the Irish missionary movements in more recent centuries". Many people, especially young people, are longing for meaning, purpose, hope and values that will last, which life without Christ certainly cannot offer. "Ireland, and much of Europe, has again become that new continent to be won for Christ", he added.
The Archbishop then invited us to look at the example of Saint Teresa of the Child Jesus, and invoked her intercession, together with that of Saint Francis Xavier and all the Holy missionaries of Ireland, so that "they bless our efforts during this extraordinary month of mission".
Finally, the President of the Bishops' Conference also urged dioceses, congregations and especially young people in Ireland to support the ‘Laudato Tree’ project which is being sponsored by the Society of African Missions. Taking its inspiration from Pope St John Paul II’s appeal for the Sahel in 1980, and Pope Francis’ 2015 encyclical Laudato Si, the project encourages concrete action, together with awareness raising and education about faith and the environment, considering that the victims of climate change are the poorest populations on earth. (SL) (Agenzia Fides, 5/10/2019)

ASIA/CHINA - Covid-19 emergency, help arrives at the Vatican and a letter from Chinese Catholics: "Holy Father, take care of yourself"

AMERICA/ECUADOR - "From pain we build unity": call of Bishops to civil society, parties, government, in the face of the pandemic