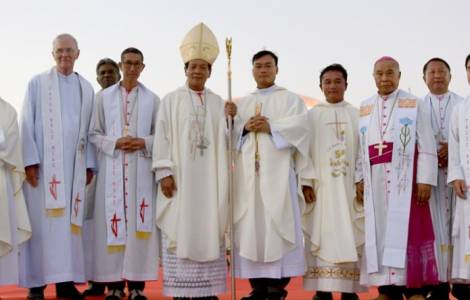 Yangon (Agenzia Fides) - The Catholic Church in Myanmar celebrates the Extraordinary Missionary Month, announced by Pope Francis for October 2019, with a special event that has a missionary dimension: the priestly ordination of new priests and religious in the country. Three Jesuits of Myanmar, Cyril Phocho Nay Myo Htet, Pius Than Naing Lin and Joseph Zau Gun were ordained priests along with six diocesan priests of Yangon on September 21 in the Cathedral of Saint Mary in Yangon, the ancient capital of Myanmar. The new priests immediately became "missionaries" within their own country, in areas where there is conflict or there are situations of poverty and destitution.
Father Cyril Phocho celebrated the first mass in his native St. Teresa parish in Ahlone, a suburb on the outskirts of Yangon. Father Joseph Zau Gun celebrated the first mass in Kachin language in his home village of Kawahka, near Myitkyina, capital of the Kachin state where armed clashes between the guerilla groups and the regular army continue causing displacement and suffering of civilians. Father Joseph's family comes from Mali Nmai Walawng, a town in the north of Kachin state but, due to the ongoing conflict, moved to Myitkyina in the parish of Sitarpu. Father Pio's first mass was celebrated in his native village, Than Le Gyi, not far from the town of Pyay.
"The most striking feature of these ordinations and subsequent celebrations is the evident joy in families, in the villages: all members of the clan or community to which each new priest belongs, people of different religions, showed enthusiasm", says to Fides Father Mark Raper, Superior of the Myanmar Jesuit Mission. "Every local Church, in welcoming the new priests, prepares a feast, with prayers, music, dances. Priests, nuns and laity of the diocese come in large numbers", he highlights, pointing out how these celebrations are a way to make the Catholic faith, the Church, the Gospel known.
"The celebration of the Eucharist and the feast with Joseph Zau Gun, Kachin Jesuit priest, and seeing Pio and Cirillo participate in the Mass in Kachin language, was a dream come true for me", said Archbishop Paul Grawng, now retired, present at the first Mass of Father Joseph Zau Gun.
The entire village and the entire parish will give the support the new priest needs. "Priestly ordination and above all the first Mass are cultural events, celebrations of the life of faith of the people expressed in all simplicity in a rich and moving ritual, which characterize the Extraordinary Missionary Month in Myanmar", said Father Raper.
"We priests ask ourselves if we will ever have enough faith and grace to share with God's people, to respond to people as Jesus would do. But people help us with their faith, their prayer, their support", said father Phocho.
"The faithful simply share their faith, their hope and their love. The goodness of the people present in these celebrations tells me that our priests will find the care and consolation in their communities that will strengthen them to reach those who feel alone or are marginalized", he adds. In a truly missionary dimension. (PA) (Agenzia Fides, 4/10/2019)

ASIA/PHILIPPINES - Catholic priest found dead in his room, due to gunshots

ASIA/PAKISTAN - New priests in Pakistan: hope for the Church in the midst of the pandemic