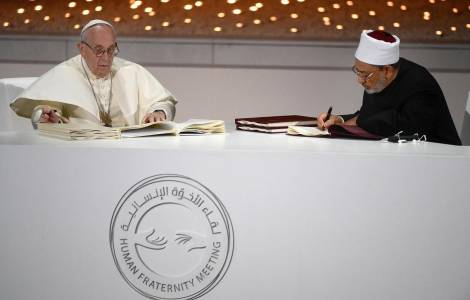 2019-12-11
Food banks in parishes, free medical services: the resilience of the Lebanese in the face of the crisis

Tripoli (Agenzia Fides) - The first “Tripoli Human Fraternity Day” on The Future of Christian-Muslim Relations after Pope Francis’ Mission to Abu Dhabi will take place at the St. Francis Convent in Tripoli-Mina, on Sunday, October 6, under the auspices of the Pontifical Missionary Union, the Pontifical Mission Societies-Lebanon, and the Custody of the Land. The event is organized in cooperation with the Religion & Security Council, Dialogue for Life and Reconciliation, and the Sustainable Network of Religious Leaders in the North of Lebanon.
Numerous other bodies and NGOs are also featured as partners in this major interreligious initiative, such as Caritas Lebanon, Tripoli Chamber of Commerce, North Lebanon Local Economic Development Agency, Tripoli Entrepreneurs Club, Maronite Youth Committee of Tripoli’s Archeparchy, Melkite Youth Patriarchal Committee, Maronite Youth Pastoral Ehden Zgharta, Middle East Institute for Research and Strategic Studies, Fly for the Lebanese Youth, Mousawat Association, Utopia.
The proceedings will consist of a Youth Interreligious Forum and a Leaders Interreligious Forum. The Youth Interreligious Forum will engage a delegation of 50 university students and young professionals from the Sunni, Alawi, and Christian communities in Tripoli and North Lebanon. The Leaders Interreligious Forum will feature prominent Christian and Muslim religious figures, including Tripoli’s Grand Mufti and Archbishop Joseph Spiteri, Apostolic Nuncio in Lebanon .
In the spirit of the Document on “Human Fraternity for World Peace and Living Together” signed in Abu Dhabi by Pope Francis and the Grand Imam of Al Azhar, Sh. Ahmad El Tayyeb, the “Tripoli Human Fraternity Day” aims to promote interreligious dialogue and cooperation between Christians and Muslims as the way forward to advance peaceful coexistence and societal harmony in Tripoli and throughout northern Lebanon.
The event will be held within the ongoing Formation Program on “The Mission of Young Christians in Tripoli and North Lebanon”, hosted by the St. Francis Convent and promoted by the Pontifical Missionary Union and the Pontifical Mission Societies-Lebanon. The Formation Program is part of the initiatives being held by the Pontifical Mission Society-Lebanon to celebrate the Extraordinary Missionary Month October 2019 announced by Pope Francis on the theme “Baptized and Sent: The Church of Christ on Mission in the World”, which will culminate in the “World Mission Day” on Sunday, October 20, when the closing ceremony of the Formation Program will take place.
To meet Pope Francis’ call to revive the missio ad gentes and renew the evangelizing efforts of Christians across the world, the Formation Program aims to strengthen the missionary identity, awareness, and skills of the young Christian participants, preparing them to actively engage the civil society and the community life in Tripoli’s cross-religious environment and cross-cultural. In this context, the Formation Program is examining the specific role of Christians and of their mission facing local major issues, such as labor and unemployment, poverty and charity endeavors, the protection of the environment, women’s rights, ecumenism, peace-building and conflicts resolution. Interreligious dialogue and Christian-Muslim relations will be addressed during the “Tripoli Human Fraternity Day”. (Agenzia Fides, 3/10/2019)

AMERICA - Message from CELAM: "Let us walk and pray together for peace in the world"