VATICAN - The Pope opens the Extraordinary Missionary Month: "to motivate us to be active in doing good" 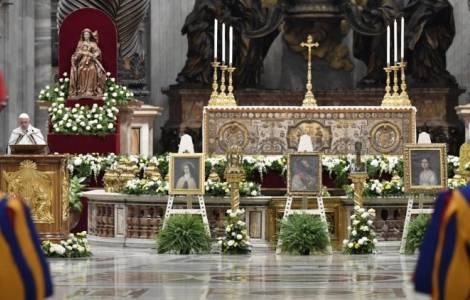 Vatican City (Agenzia Fides) - "The Lord calls us to make our talents bear fruit, with boldness and creativity. God will ask us if we stepped forward and took risks, even losing face. This extraordinary Missionary Month should jolt us and motivate us to be active in doing good. Not notaries of faith and guardians of grace, but missionaries". With these words Pope Francis began the homily during the celebration of the Vespers yesterday, October 1, memory of Saint Teresa of the Child Jesus, patroness of the Missions, for the beginning of the Extraordinary Missionary Month, commenting on the parable of the man who, before leaving on a journey, calls his servants and entrusts his property to them (Mt 25,14-30).
"We become missionaries by living as witnesses: bearing witness by our lives that we have come to know Jesus. It is our lives that speak", said the Pope in the Vatican Basilica packed with faithful including many missionaries, who stressed the importance of the word "witness", which has "the same root as the word “martyr”. The martyrs are the primary witnesses of faith: not by their words but by their lives. They know that faith is not propaganda or proselytism: it is a respectful gift of one’s life. Therefore can we "who have discovered that we are children of the heavenly Father, keep silent about the joy of being loved, the certainty of being ever precious in God’s eyes? That is a message that so many people are waiting to hear. And it is our responsibility".
Recalling the conclusion of the parable, when the master comes back and asks what they have done with the talents delivered, the Pope spoke of the gravity of the sin of omission, "because we have been given life not to bury it, but to make something of it; not to keep it for ourselves, but to give it away. To live by omission is to deny our vocation: omission is the opposite of mission". He then made some practical references: "We sin by omission, that is, against mission, whenever, rather than spreading joy… we yield to resignation... when we complain and keep saying that everything is going from bad to worse... when we become slaves to the fears that immobilize us…when we live life as a burden and not as a gift; when we put ourselves and our concerns at the centre, and not our brothers and sisters who are waiting to be loved".
Quoting St. Paul, "God loves a cheerful giver" (2 Cor 9:7). The Pope highlighted that God loves a Church on the go. But let us be attentive: if it is not on the go, it is not Church. The Church is meant for the road, meant to be on the move". Her strength "is not social or institutional relevance, but humble and gratuitous love".
"Today we begin the Missionary Month of October in the company of three “servants” who bore much fruit", recalled Pope Francis: Saint Therese of the Child Jesus, Saint Francis Xavier, the Venerable Pauline Jaricot, whose images were placed before the altar ... a religious woman, a priest and a lay woman. "They remind us that no one is excluded from the Church’s mission". He therefore continued: "Yes, in this month the Lord is also calling you", fathers and mothers of families; young people who dream great things; who work in a factory, a store, a bank or a restaurant; who are unemployed; who are in a hospital bed. "The Lord is asking you to be a gift wherever you are, and just as you are, with everyone around you".
The Lord, the Pope pointed out, also expects "someone to have the courage to set out and to go wherever dignity and hope are most lacking, where all too many people still live without the joy of the Gospel", recalling that missionary work is not done "with business organizations, with a business plan, since the Holy Spirit is the protagonist of our mission". Pope Francis concluded the homily with an exhortation: "Courage, brothers and sisters! Courage, Mother Church! Rediscover your fruitfulness in the joy of mission!"
At the end of the vespers, the Pope delivered the cross to a group of nuns, religious and laity who will go on mission to Brazil, South Sudan, the Democratic Republic of the Congo, Kazakhstan, Cambodia, Taiwan, Bangladesh and Kyrgyzstan. (SL) (Agenzia Fides, 2/10/2019)