AMERICA/BOLIVIA - We ask forgiveness from the God of life and creation, for the serious wounds inflicted on Chiquitania 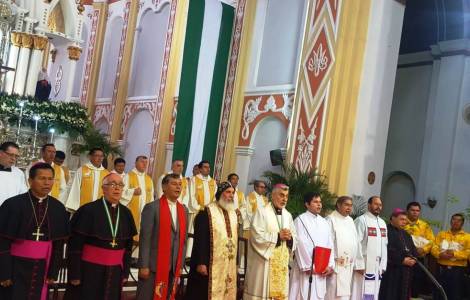 2020-07-29
Campaign: "United for health and for life" - religious groups in support of the health system

2020-07-24
In the face of an increase in infections, the Bishops reiterate that "it is not wise to hold elections"

2020-07-22
The funeral of Mgr. Scarpellini: in life he gave everything for the announcement of the Gospel

2020-07-16
Mgr. Scarpellini has died: a great missionary who gave his whole life for the Bolivian Church

Santa Cruz (Agenzia Fides) - The request for forgiveness from the God of life and Creation, due to the serious wounds caused to nature, biodiversity and the population of Chiquitania, characterized the celebration of the "Ecumenical Te Deum", which took place yesterday, 24 September, in the minor Basilica of San Lorenzo Martire, presided by the Archbishop of Santa Cruz, Mgr. Sergio Gualberti. The occasion was the 209th anniversary of the liberation of Santa Cruz from colonialism.
According to information sent to Fides, the leaders of the Christian Churches participating in the ecumenical dialogue were also present: Pastor Jorge Wills of the Methodist Church in Bolivia, Father Hedra El Hamba Boula of the Coptic Orthodox Church, Pastor Oscar Villareal of the Anglican Church and Pastors Nathan Tows and Leidy Muñoz of the Mennonite committee. The main civil authorities of the department and the city participated in the celebration.
"This year we celebrate our events in a difficult time for our department and for our city - said the Archbishop at the beginning of the homily -. On the one hand, the climate of uncertainty and tension for the electoral campaign and on the other hand, 'the entire creation is suffering the pains of childbirth' due to the fires in Chiquitania (see Fides 19/9/2019). We suffer and pray for the loss of lives, for the indigenous people who have lost everything due to the wounds to our common home, to the pollution of air and water, to the devastation of various species of flora and fauna".
Therefore Mgr. Gualberti continued: "We should put into practice the Santa Cruz project, the 'house built on the rock' of the common good and on the sacred respect for the 'mother earth sister' and the perennial values of truth, solidarity, justice and freedom, where all the children of this blessed land live like brothers in security, harmony and peace". A particularly touching moment was experienced at the time of the offertory, when the firemen entered the procession, with a black bow on the flag, as a sign of mourning for the firemen who died during the fires.
At the end of the celebration, Mgr. Gualberti commented to the Bolivian national press what the Extraordinary Missionary Month means, starting from the Bolivian reality of Santa Cruz: "In Bolivia we have the great challenge of truly being a missionary Church. A missionary Church, on a mission,for the mission, there are no ad gentes missionaries, but in Bolivia we need missionaries in our suburbs and in the countryside, because priests are often necessary, but they are necessary because we are in a dechristianized world, that is why every baptized realizes that from the moment of his baptism he is a missionary! Not only priests and religious are missionaries, but every baptized person is a missionary. If he has received this gift, he cannot be selfish, because if it is a gift of faith and has to share it!" (CE) (Agenzia Fides, 25/9/2019)

NEWS ANALYSIS - Environmental disasters and the Church's commitment: the path of safeguarding creation in Central Asia