ASIA/AFGHANISTAN - "Friday For Future" in Kabul: "We are fighting to give hope to future generations" 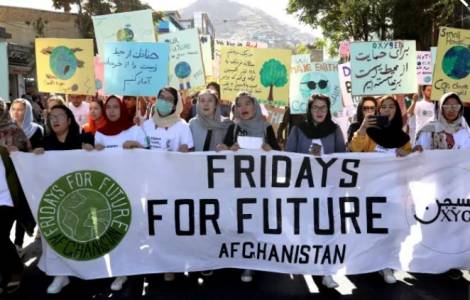 2020-01-24
Caritas project for children with disabilities: new collaboration with the state and with companies

2019-11-20
The Barnabite, Scalese: "The exchange of prisoners, a necessary step towards peace"

Kabul (Agenzia Fides) - "There are many problems in Afghanistan, linked to the fear of war and explosions. But, during our marches, we think: we young people are fighting for a better future, to give the next generation hope. We had already started some small activities for the protection of the environment, but when we discovered that the whole world was engaged in a global campaign, we decided to join the challenge launched by Greta Thunberg. We did it because we believe that every country should oppose the crisis that affects our planet. We are currently active in Kabul, but in the future we will also reach four other provinces". This is what Qais Murshid, member of the leadership of the "Friday For Future - Afghanistan" movement, which welcomes young Afghans especially from Kabul told Agenzia Fides.
"Our goal is to fight against global warming and to reduce the impact of plastic and air pollution. We are also committed to building the culture of environmental care", explains the young activist.
The Afghan movement, he says, was born in July 2019: "Our first march involved over 200 people, while the second was much wider: many citizens joined, we were not able to know the exact number of participants. The initiative was very well received, because many people have finally taken awareness of the problem of global warming and that the environmental crisis also affects our country".
Afghanistan's ecological issues, the young man points out, "differ from those in other countries. The two main problems are water contamination and heavy air pollution. Furthermore, a very serious phenomenon is the alternation of droughts and floods: last year we saw people leaving their areas of origin due to the lack of water, but at the same time, floods killed people and destroyed homes and agricultural land. The other difficulties are linked to the disposal of waste and the lack of a sensitivity regarding respect for the environment".
The spread of a culture of protection of the "common home" is one of the key points of the Encyclical "Laudato sì". According to Pope Francis, it "cannot be reduced to a series of urgent and partial responses to the problems that arise regarding environmental degradation, the depletion of nature reserves and pollution. It should be a different look, a thought, a policy, an educational program, a lifestyle and a spirituality that give form to a resistance in the face of the advancing of the technocratic paradigm". The spirit of young Afghans is proceeding in this direction. (LF) Agenzia Fides, 23/9/2019)

AMERICA/BRAZIL - Bishops on beach pollution: there is no future for humanity without respect for the common home

EUROPE/IRELAND - Extraordinary Missionary Month: "It is time to revive our missionary genes, to renew our hearts for mission"

ASIA/TAJIKISTAN - The commitment of the Catholic community to the protection of Creation, also with the "culture of recycling"

ASIA/TAJIKISTAN - The commitment of the Catholic community to the protection of Creation, also with the "culture of recycling"