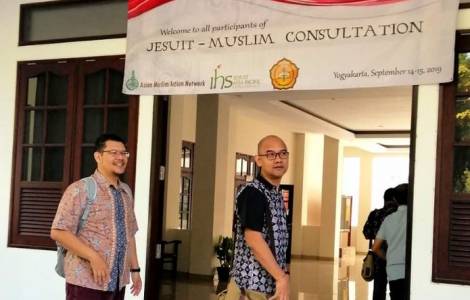 Yogyakarta (Agenzia Fides) - Promoting Islamic-Christian dialogue in Indonesia, the most densely populated Muslim country in the world, and throughout Asia, especially in educational institutions and universities: is the tireless activity of two associations, the "Jesuits and the Muslim intellectuals Association" (JAMIA) and the" Asian Muslim Action Network" (AMAN), that recently held their first meeting in Yogyakarta, an Indonesian city on the island of Java.
"It was the first time that Jesuits and Muslim intellectuals came together in the spirit of fraternity and collaboration to draw up programs for education in Islamic-Christian dialogue in Asia, especially among young people. Furthermore, forms of cooperation were activated in the field of assistance, social services, education", said to Fides Jesuit Father Greg Soetomo, secretary of the program on dialogue with Islam of the Jesuit Conference of Asia and the Pacific (JCAP).
Both delegations discussed how to find ways to promote harmony and the common good, while Asian Christians and Muslims live their faith. Radicalism, fundamentalism, intolerance and the culture of violence - said those present - spread an "anti-life culture" in Asia. In this context, Jesuits and Islamic leaders intend to pay attention to the social, cultural, political and religious mission, exploring the ways to restore a reconciled and harmonious and just world.
The Jesuits of Asia have developed various initiatives that put them in contact with other faiths: their training institutes like the Vidyajyoti College of Theology (Delhi, India), the Sanata Dharma University (Yogyakarta, Indonesia) and the Henry Martyn Institute (Hyderabad, India) regularly hold contacts and courses with Muslim scholars and institutes. At this level, AMAN and JAMIA are working to develop a shared curriculum on education for Muslim-Christian dialogue, to be proposed and developed in Jesuit schools and universities in Asia, as well as in Islamic institutes.
Many secular women are involved in the dialogue efforts between JAMIA and AMAN. "I am grateful to Father Soetomo for having believed in us - lay women engaged in Muslim-Christian dialogue and peace building for over two decades - and for having invited us to contribute to the success of their initiatives in the Asian region", said to Fides Professor Marites Guingona Africa involved in JAMIA. Mona Pangan, a professor at the University of Xavier, Cagayan de Oro, in the Philippines, told Fides that "the opportunity and dialogue with Muslim leaders and friends in Indonesia were truly overwhelming. It was indeed a very fruitful and productive meeting "This open dialogue between Christians and Muslims allows them to go beyond their wounds, prejudices and suspicions in their vision of Islam and its followers". Mona and her team focused on drafting youth leadership meetings and training programs.
Asia is the largest and most densely populated continent in the world, cradle of many religions such as Buddhism, Christianity, Confucianism, Hinduism, Islam, Jainism, Judaism, Shintoism, Sikhism, Taoism and Zoroastrianism. Islam in Asia has about 1.1 billion followers (24.3% of the population in Asia, who are in total about 4.4, billions), while about 7.1% of the Asian population is of Christian faith. (SD) (Agenzia Fides, 18/9/2019)

AFRICA/MALAWI - "Excellent results with online teaching; now the challenge is to reopen face-to-face courses", says the Vice-Chancellor of the Catholic University

ASIA/LEBANON - Patriarch Rai insists on Lebanese "neutrality", as the contagions of Covid-19 rise