ASIA/INDONESIA - Harmony and the common good: Cardinal Bo leads a group of religious leaders in Indonesia 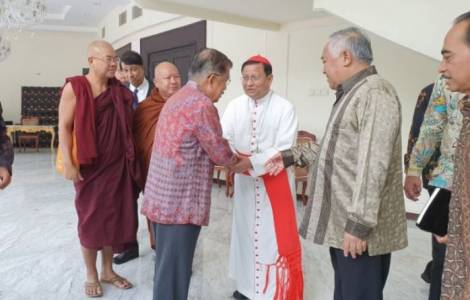 2020-06-10
Pandemic and Pancasila: the Charter of the five principles, the "guiding beacon" for care, cooperation and brotherhood

Jakarta (Agenzia Fides) - Tolerance, harmony and interreligious relations in Myanmar and Indonesia: these are the themes at the center of the journey of some Burmese leaders of different religious denominations who have come to Indonesia for institutional meetings. The delegation, led by Cardinal Charles Maung Bo, Archbishop of Yangon, met Indonesian vice president Jusuf Kalla on 9 September in Jakarta. The visit was organized thanks to the cooperation between the government and the Indonesian Interreligious Council (IRC) initiated by Din Syamsuddin, a well-known Indonesian Muslim leader. "With the leaders of Myanmar's religious communities we talked about how to maintain interreligious harmony in their respective countries", said Syamsuddin.
According to Syamsuddin, the vice president emphasized the founding principles of Indonesia, namely the "Pancasila" (the "Charter of the five principles" at the basis of civil coexistence) and the Indonesian national motto "Bhineka Tunggal Ika", that is "Unity in diversity".
These two tracks, he said "have helped people lead a harmonious existence", making this approach in the name of moderation a reference for other countries with a pluralistic structure.
The leader of the delegations of Myanmar, Cardinal Charles Bo, Archbishop of Yangon, praised the meeting and expressed the hope of "being able to take inspiration from Indonesia to cultivate equality between people of different faiths and to promote it as a country of origin as in other parts of Asia".
"We could understand how this predominantly Muslim nation supports equality without any discrimination", said Cardinal Bo, who is also president of the Federation of Asian Bishops' Conferences (FABC), referring to Indonesia.
Cardinal Bo and other religious leaders from both countries discussed in a meaningful way on how to promote interreligious harmony and work for the common good.
In Myanmar, religion plays a key role, the Cardinal remarked, recalling the political transition phase and the recent democratic developments that the nation has experienced. In that context, he said "we wish to promote religious and social harmony among all the ethnic and religious components in the country, so as to be able to face social, economic and cultural inequalities and develop national unity".
Myanmar is a country with over 48 million Buddhists, which make up about 90% of the population. The rest are Christians, Muslims, Hindus…. In recent years the country has faced tensions between Rohingya Buddhists and Muslims in the state of Rakhine, on the border with Bangladesh. (SD) (Agenzia Fides, 11/9/2019)

AFRICA/MALAWI - Religious leaders united in defending the sacredness of life: no to abortion

OCEANIA/AUSTRALIA - Towards World Mission Day: a thousand faces for mission