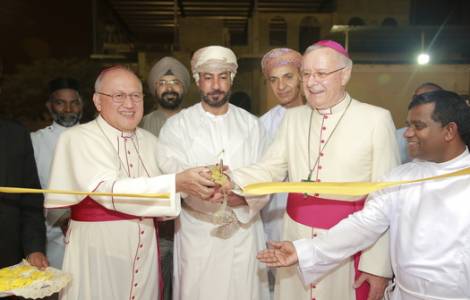 Salalah (Agenzia Fides) - More than a thousand people took part in civil ceremonies and liturgical celebrations that took place on Saturday 7 and Sunday 8 December in the Sultanate of Oman, on the occasion of the inauguration of a new Catholic church. The place of worship is dedicated to St. Francis Xavier, patron of the missions, and is located in the city of Salalah, governorate of Dhofar. The first stone of the church was laid in February 2018, and the construction of the entire place of worship was completed in just 18 months.
The church has a capacity of 600 seats, and is also equipped with a multi-purpose hall that can accommodate another 400 people.
On Saturday 7 September, the civil inauguration ceremony saw the presence, among others, of Archbishop Francisco Montecillo Padilla - who serves as Apostolic Nuncio in Yemen, Kuwait, Bahrain, United Arab Emirates and Qatar - together with Dr. Ahmed Khamis Masood Al Bahri, director of the Ministry of Religious Endowments and Religious Affairs of Oman. The event was also attended by Bishop Paul Hinder OFM Cap, along with priests, men and women religious.
In his speech, among other things, Director Ahmed Khamis Masood Al Bahri, expressed his joy for the construction of a church where priests, men and women religious, and laity can carry out their pastoral work in favor of the new generations. Archbishop Montecillo Padilla expressed the gratitude of the Catholic Church towards Sultan Qaboos Bin Said Al Said who granted all the permits for the construction of the church. The civil authorities of the country - the Nuncio underlined - showed their benevolence in meeting the spiritual expectations of the people, and also showed the world that "Oman enjoys peace because of this religious tolerance, and commitments taken on to preserve it". In addition, addressed to the baptized present, Archbishop Montecillo Padilla invited everyone to look at the new church as a sign "that God always walks beside us in good and bad times, even if our prayers are not fulfilled immediately". In his speech, Bishop Paul Hinder thanked the many workers who with their work and skills built the church in such a short space of time, and recalled that in all masses taking place in Oman, prayers are always offered for the ruling authorities and for the good of the whole country.
In 1979, Sultan Qaboos bin Said he donated the land for the construction of the first church of Salalah. In 1981, an ecumenical center dedicated to the Three Magi was also inaugurated at that church, to recall also the tradition according to which one of the three oriental dignitaries who arrived in Bethlehem to adore the Child Jesus came from the region which today corresponds to Oman known since ancient times for the production of incense and myrrh.
On Sunday 8 September at 7 pm, the church of St. Francis Xavier in Salalah was inaugurated from a liturgical point of view with a solemn Eucharistic concelebration presided by Bishop Paul Hinder. About 60,000 Catholics reside in the Sultanate and there are currently 5 parishes (two in Muscat, two in Salalah and one in Sohar). (GV) (Agenzia Fides, 9/9/2019)