ASIA/LEBANON - Conference of Catholic schools: different approaches to the crisis of non-state schools 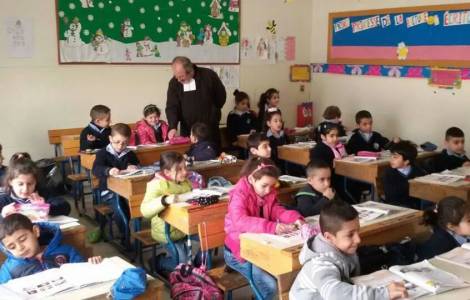 2019-12-11
Food banks in parishes, free medical services: the resilience of the Lebanese in the face of the crisis

Beirut (Agenzia Fides) - On the eve of the beginning of the new school year, for the third consecutive year Catholic schools put the situation of severe economic crisis in many private schools at the center of their annual conference, also caused by the law with which in the summer of 2017, the government at that time ordered the new "salary grids" for public sector workers, including the school sector. But for the first time, in the interventions of the most authoritative speakers, one perceives different accents and perspectives regarding the way to face the crisis.
The 26th annual meeting, organized by the Secretariat of Catholic schools in Lebanon, kicked off on Tuesday 3 September at the College of Our Lady of Louaizé, in Zouk Mosbeh, 12 km north of Beirut. This year the conference is entitled "To educate together". Since the first interventions, attention has returned to focus on the enormous sustainability and survival problems faced by many minor Catholic schools, especially in the less prosperous areas of the Country, also due to the legislative provisions of 2017 on wage grids and the consequent increase in salaries due to teaching and non-teaching staff in private schools.
In his speech, Maronite Patriarch Bechara Boutros Rai reiterated the request - addressed to the government and national institutions - to "take on their responsibilities". The Patriarch also accused Lebanese politicians of having filled "their own pockets" with public resources that would now be needed to support the crisis regarding the education system.
In Lebanon, Catholic schools, with nearly 200,000 students, have so far largely chosen not to apply the law on wage grids, which could compromise their very existence. During the conference, the request to freeze the law promulgated in 2017 resurfaced, also considering the difficulties faced by the state public administration itself in finding the resources necessary to adapt the salaries of its employees to the new legislative provisions. At the same time, not only claims, protests and accusations against politicians were heard in the Conference, also self-critical accents and requests to review the internal dynamics of the entire network of Catholic educational institutions were highlighted, encouraging forms of collaboration and help among schools that enjoy good health from a financial point of view and those that carry out their educational work also among the economically weaker sections of the population.
The Secretary General of Catholic Schools, Father Boutros Azar, insisted on the urgency of "strengthening the partnership between private educational institutions throughout the Country". While Father Charbel Batour, rector of the Notre-Dame de Jamhour College, indicated as a matter of urgency an overall process of "restructuring" of the same General Secretariat of Catholic schools, to find solutions to the new problems posed by the evolution of the Lebanese socio-economic context. Among other things, the institution of a self-managed "national fund" of Christian schools was proposed, to be used to support the educational work of schools in difficulty, given that "we can no longer rely on the State". (GV) (Agenzia Fides, 4/9/2019)

ASIA/AFGHANISTAN - The "School of Peace" expands, while 3.7 million children are without school

AMERICA/NICARAGUA - Every effort is being made in Nicaragua talks