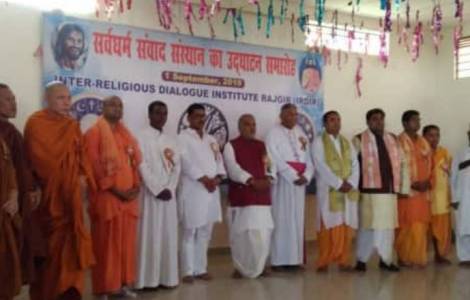 2020-01-08
Christian leaders in the ruling party: the new citizenship law is not inclusive and needs to be expanded

2019-12-18
Missionary Church's commitment to those affected by leprosy

2019-12-17
The new law on citizenship to immigrants "is unconstitutional": appeal to "civil disobedience"

Patna (Agenzia Fides) - The Archdiocese of Patna, in the Indian state of Bihar, has inaugurated the new Institute of interreligious dialogue of Rajgir (IRDIR) to promote peace, harmony and solidarity among the different religious communities of Northern India. "It is our duty to promote goodwill and religious unity. This Institute is committed to peace, unity and the unity of people", said to Fides Jesuit Archbishop William D'Souza, at the head of the diocese of Patna, at the inauguration ceremony held on September 1. The event was attended by over 450 Christians, about 250 Hindus, Muslims, Sikhs, Buddhist monks, Jainist nuns and numerous government officials.
"The institute will help defuse the negative mentality of the conflict among religions. One can work and carry out research together in this field", said Shravan Kumar, Minister of Rural Development and Parliamentary Affairs of Bihar. Ravi Jyoti, one of the members of the Bihar State Parliament, said:"If the Church were not present, the poor and Dalits in this state would not have received an education. They would be poorer and underdeveloped in all fields".
"The inauguration of this Christian institution brings life and solidarity to the religiosity of Rajgir", said Muslim leader Maulvi of Makdam Kund.
Speaking of the importance and needs of the IRDIR, Father James Rosario, Director of the new Institute, told Fides: "The Institute welcomes everyone. It will organize a round table with religious leaders, experts and scholars of various religions every three months. The Catholic Church - he added - walks in dialogue with other religions to share social challenges and promote a happy life in society".
Philosophy and theology students who are studying to become Catholic priests will be able to directly experience relationships with members of the Buddhist, Jain, Sufi, Hindu communities, he explained.
"Our commitment aims to bring goodwill and understanding among the various religious groups and to bring peace to the minds and hearts of the people", concluded the Director.
Rajgir is a historic pilgrimage center of Buddhists, Jains and Muslims. It is a land where there are many different communities and different religious experiences. According to the 2011 census, 80% or 960 million of the 1.2 billion Indian citizens are of Hindu religion. Muslims represent 14.2 percent of the population (170 million) followed by Christians with 2.3 percent (28 million). (SD) (Agenzia Fides, 4/9/2019)

EUROPE/ITALY - Migrants: the Scalabrinians also support the appeal of Poor Clares and Carmelites