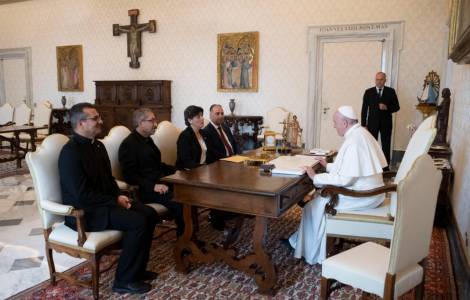 2020-12-15
Standstill in the formation of a government: Patriarch Younan recalls the shared responsibility of Christian politicians

Rome (Agenzia Fides) - Christians in the Middle East "are not minorities and do not need any protection". They, "with their own testimony, are building bridges with their fellow travelers of all religions, in the region and in the whole world". This was underlined by Professor Souraya Bechealany, Secretary General of the Middle East Council of Churches, MECC, in the audience held on Monday 2 September with Pope Francis, in the Apostolic Palace of the Vatican City. Professor Souraya Bechealany was accompanied by a MECC delegation composed of Father Gaby el Hachem (director of the department of theology and ecumenical relations of the Council), by Dr. Ziad el Sayegh (consultant for communication and strategies of the ecumenical body) and by Maronite priest Rouphael Zgheib, national director of the Pontifical Mission Societies of Lebanon.
During the audience, which lasted 40 minutes, Souraya Bechealany thanked Pope Francis for his exceptional initiatives aimed at encouraging the ecumenical processes in favor of Christian unity, with the intent to witness together the work of Christ for the benefit of human dignity. The meeting provided the MECC delegation with the opportunity to present the "KAIROS Middle East project to the Pope: towards a global pact of the Churches", which in the judgment of its inspirers manifests a singular assonance with the "prophetic vision" and the Pope's apostolic passion" in this critical phase of the history of the Middle East and of the world". Professor Souraya Bechealany asked Pope Francis to bless the project, which will be presented in its complete form and its possible developments at the next MECC General Assembly, scheduled for September 2020. Receiving the delegation, the Successor of Peter recalled that he was struck by Souraya Bechealany's speech during the ecumenical meeting in Bari, in July 2018, and praised her commitment as a woman at the head of MECC, reiterating that "the Church is a woman, is she not the bride of Christ?". The Pope expressed his blessing for MECC and its initiatives, and also invited the members of the Council to focus their choices and their actions around the experience of synodality to be recognized as an expression of the dynamics moved and nourished in the ecclesial body by the work of the Holy Spirit.
During the conversation - reports the MECC website - Souraya Bechealany also confided to the Pope her desire to see the start of a process that leads to the celebration of a "Vatican Council of the Third Millennium", given that "the world is waiting for a prophetic voice that speaks in the face of populism, racism, nationalism and extremism". Concluding the meeting, the Pope said: "Pray for me. It is not a simple thing". The MECC delegation gave the Pope an icon of Saint Ignatius of Antioch, a sign of the union of Churches.
The Middle East Council of Churches, founded in 1974 in Nicosia and currently based in Beirut, aims to facilitate the convergence of Middle Eastern Christian communities on topics of common interest and to favor the overcoming of confessions of a confessional nature.
Professor Souraya Bechealany (in the photo), a Maronite Christian, teaches theology at the Université Saint-Joseph de Beyrouth. Souraya was elected general secretary of MECC in January 2018, and together with her collaborators she undertook a process of restructuring the departments of the ecclesial body. (GV) (Agenzia Fides, 3/9/2019)